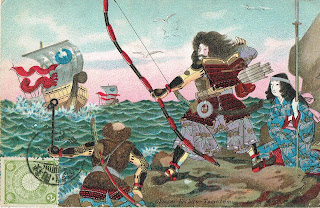 Tametomo is known in the epic chronicles as a powerful archer and it is said that he once sunk an entire Taira ship with a single arrow by puncturing its hull below the waterline [pictured on this postcard]. It is also added in many legends that his left arm was about 4 in. longer than his right, enabling a longer draw of the arrow, and more powerful shots. He fought to defend Shirakawa-den, alongside his father, against the forces of Taira no Kiyomori and Minamoto no Yoshitomo, his brother. The palace was set aflame, and Tametomo was forced to flee.

After the Hōgen Rebellion, the Taira cut the sinews of Tametomo's left arm, limiting the use of his bow, and then he was banished to the island of Ōshima in the Izu Islands. Tametomo eventually killed himself by slicing his abdomen, or committing seppuku. He is quite possibly the first warrior to commit seppuku in the chronicles.

In the Chūzan Seikan (1650) by Shō Shōken, the first history of Ryūkyū, is mentioned that he made his way down to Okinawa during his exile, and sired the first known chief of Chūzan - Shunten.

Written after Invasion of Ryukyu (1609), this narrative was probably constructed to connect and legitimise the relation of Japan's imperial family with the Ryukyu Islands. During the Meiji period the myth was considered as an official and historical fact for the Japanese "legitimacy" and "sovereign right" of the annexation of the Ryukyu Kingdom in 1879. 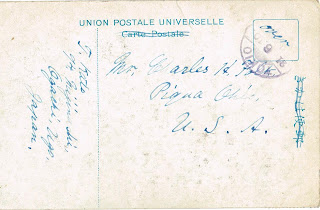 The stamp is placed in the front side of the card. Apost stamp with the date 6 October 1921 can be seen in the back