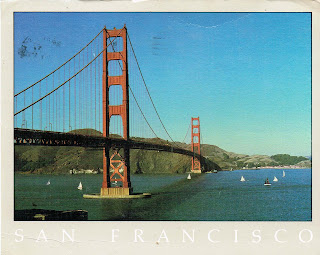 This postcard shows the Golden Gate Bridge in San Francisco, California, USA. San Francisco (Spanish for 'Saint Francis'), officially the City and County of San Francisco, is the cultural, commercial, and financial center of Northern California. It covers an area of about 46.89 square miles (121.4 km2), mostly at the north end of the San Francisco Peninsula in the San Francisco Bay Area. San Francisco is the fourth-most populous city in California and the 13th-most populous in the United States, with a 2017 census-estimated population of 884,363. The consolidated city-county is also the fifth most densely populated U.S. county, behind only four of the five New York City boroughs. As of 2016, it was the 7th highest-income county in the United States, with a per capita personal income of $110,418. 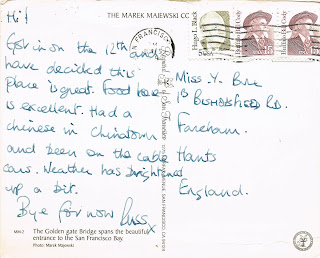 It was posted on 15th June 1985 and it reads: 'Hi! [...] on the 12th and have decided this place is great. Food here is excellent. Had a chinese in Chinatown and been on the cable cars. Weather has brightened up a bit. Bye for now, Russ x'. Sounds like Russ had a good time in San Francisco!