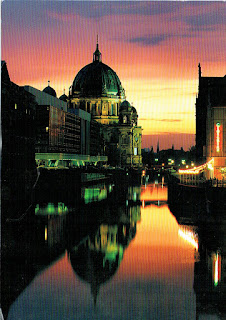 This beautiful postcard was sent to me by Carina from Berlin, Germany via Postcrossing [DE-7301557]. It shows the Berlin Cathedral, the Palace of the Republic and the Spree seen from the Nikolai Quarter. She informs me that 'the view on this postcard is not what you would see today. The Palace of the Republic has been torn down. In it's place, the old Berlin Palace is been rebuilt.'

The Palace of the Republic (German: Palast der Republik) in East Berlin was the seat of the parliament of the German Democratic Republic (also known as East Germany), the Volkskammer (People's Chamber), and also served various cultural purposes. Located between Schlossplatz and the Lustgarten (referred to jointly as Marx-Engels-Platz from 1951 to 1994) on an island in the River Spree, it also housed two large auditoria, art galleries, a theatre, 13 restaurants, a bowling alley, a post office, and a discothèque. On 23 August 1990, the Volkskammer ratified the treaty on German reunification, which was later also confirmed by the Bundestag in Bonn. The building was constructed between 1973 and 1976 on the site of the former Berliner Stadtschloss (City Palace), and was completely demolished by 2008 to make room for a reconstruction of the Stadtschloss, which began in 2013. 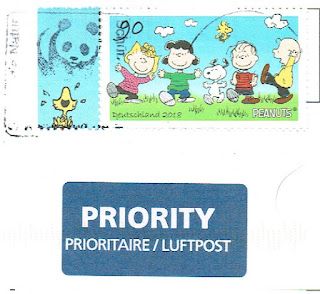 She used 2 Peanuts stamps. Peanuts is a syndicated daily and Sunday American comic strip written and illustrated by Charles M. Schulz that ran from October 2, 1950, to February 13, 2000, continuing in reruns afterward. The comic strip is the most popular and influential in the history of comic strips, with 17,897 strips published in all, making it "arguably the longest story ever told by one human being". At its peak in the mid- to late 1960s, Peanuts ran in over 2,600 newspapers, with a readership of around 355 million in 75 countries, and was translated into 21 languages. It helped to cement the four-panel gag strip as the standard in the United States, and together with its merchandise earned Schulz more than $1 billion.

The strip focuses entirely on a social circle of young children, where adults exist but are rarely seen or heard. The main character, Charlie Brown, is meek, nervous, and lacks self-confidence. He is unable to fly a kite, win a baseball game, or kick a football held by his irascible friend Lucy, who always pulls it away at the last instant.

Peanuts is one of the literate strips with philosophical, psychological, and sociological overtones that flourished in the 1950s. The strip's humor (at least during its '60s peak) is psychologically complex, and the characters' interactions formed a tangle of relationships that drove the strip.

Peanuts achieved considerable success with its television specials, several of which, including A Charlie Brown Christmas and It's the Great Pumpkin, Charlie Brown, won or were nominated for Emmy Awards. The Peanuts holiday specials remain popular and are broadcast on ABC in the U.S. during the appropriate seasons. The Peanuts franchise also had success in theatre, with the stage musical You're a Good Man, Charlie Brown an oft-performed production.