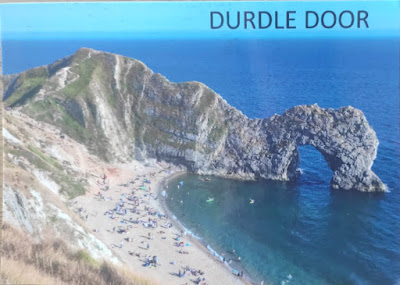 Last weekend we wanted to get  away from the heat, so we went to Dorchester. A friend told me about Durdle Door and we thought i would be nice to swim there! HUGE mistake. It was so unbelievably crowded that we didn't even get to the beach. We decided to go away. Deflated, on our way back, we saw a brown sign with the name 'Wimborne Minster' and decided to visit it. It turns out it is a cute little town with picturesque alleys and nice cafes in small piazzas. We will try to go back and spend a weekend!

Durdle Door (sometimes written Durdle Dor) is a natural limestone arch on the Jurassic Coast near Lulworth in Dorset. It is owned by the Welds, a family who own 12,000 acres (50 km2) in Dorset in the name of the Lulworth Estate. It is open to the public.

There is a dearth of early written records about the arch, though it has kept a name given to it probably over a thousand years ago. In the late 18th century there is a description of the "magnificent arch of Durdle-rock Door", and early 19th-century maps called it "Duddledoor" and "Durdle" or "Dudde Door". In 1811 the first Ordnance Survey map of the area named it as "Dirdale Door". Durdle is derived from the Old English thirl, meaning to pierce, bore or drill, which in turn derives from thyrel, meaning hole. Similar names in the region include Durlston Bay and Durlston Head further east, where a coastal stack suggests the existence of an earlier arch, and the Thurlestone, an arched rock in the neighbouring county of Devon to the west. The Door part of the name probably maintains its modern meaning, referring to the arched shape of the rock; in the late 19th century there is reference to it being called the "Barn-door", and is described as being "sufficiently high for a good-sized sailing boat to pass through it."