Today we went to the Brooklands Museum for the '1940s Relive'. Quite a spectacular experience. It felt as if we really traveled back in time! Of course I couldn't resist and buy a couple of postcards. 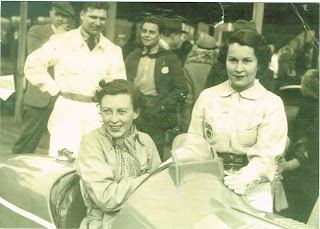 I truly love this postcard - even though it is just a reprint. It shows Doreen Evans and Kay Petre with an MG in the  Brooklands Paddock, 1930s [copyright Brooklands Museum]. American-born driver Kay Petre, she was born Kathleen Coad Defries in 1903 and moved to England with her husband Henry Petre in 1930. Kay took an interest in motor racing after being at events held at Brooklands, a circuit that also had an airfield where her husband would often fly. Henry bought Kay her first car for her birthday – a Wolseley Hornet Daytona Special that she landed on the podium in her first two races. By 1933 she was ready for something more and upgraded to a far more capable 2 litre Bugatti.

Doreen Evans was one of the leading female racing drivers of the 1930s and she came from a family of dedicated racers who owned the Bellevue Garage in Wandsworth. She was also one of “The Dancing Daughters” to race for MG at Le Mans in 1935. [source] 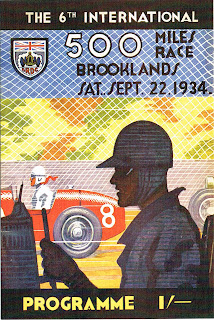 The British Racing Drivers' Club (or BRDC) is a membership body which represents the interests of professional racing drivers from the United Kingdom. The club was founded in April 1928 by Dr. J. Dudley Benjafield, one of an informal group of British racing drivers known as the "Bentley Boys". The BRDC began primarily as a socialising club for Benjafield and his fellow drivers.
Posted by ikouneni at 11:14 AM