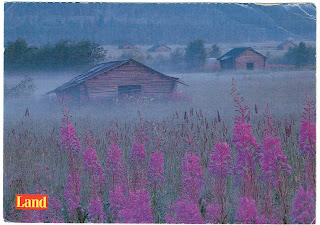 This atmospheric postcard shows fog over a lavender field in North Bothnia in Sweden. You've got to love the colours!


Norrbotten, known in English as North Bothnia, is a Swedish province (landskap) in northernmost Sweden. It borders south to Västerbotten, west to Swedish Lapland, and east to Finland. During the Middle Ages, Norrbotten was considered to be terra nullius ("no man's land"). The area was sparsely populated by Sami, Kvens and different tribes/people related to the Finns. From the Middle Ages on, the Swedish kings tried hard to colonise and Christianise the area. This took time, however; even today, there are Finnish and Sami minorities living in the area, who have maintained their own culture and customs. Not being one of the old historical provinces of Sweden, Norrbotten had not been granted a coat of arms in the same way as the others. As recently as 1995, after decades of controversy, Norrbotten got its arms, thus recognized as a "real" province. 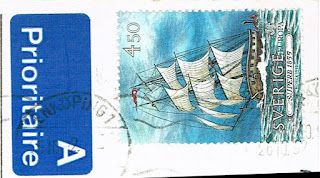