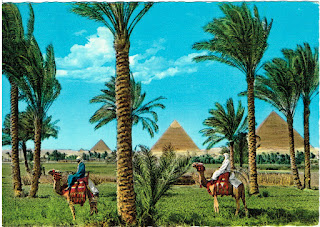 This postcard is from the Giza Pyramids in Egypt. Giza is located west and south of modern Cairo, in the vast desert imagined by the ancient Egyptians to be the land of the dead. Guarded by the Great Sphinx, the plateau is dominated by the massive pyramids of Khufu (Gr. Cheops), Khafre (Gr. Chephren), and Menkaure (Gr. Mycerinus), all of whom ruled Egypt during the 4th Dynasty (c. 2500 BC). The royal pyramid complexes, which include temples, causeways, and satellite pyramids, are surrounded by tombs of the elite-members of the royal family, the nobility, and the priesthood. At the foot of the plateau, south of the Great Sphinx, lie the Cemetery and Town of the Pyramid Builders, where the men and women who constructed the royal and elite tombs on the main plateau lived, worked, and were buried. 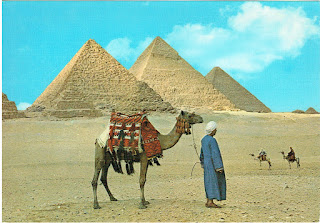 Probably the most famous site in Egypt, Giza has fascinated the world for millennia. Although the archaeological and historical evidence proves without a doubt that the Great Pyramid of Khufu and its companions are royal tombs built during the Old Kingdom, alternative theorists continue to argue that they were built by aliens or people from the mythical land of Atlantis. The pyramids are indeed remarkable feats of engineering: the Great Pyramid is aligned to the cardinal directions to within 1 degree of arc. However, this was within the engineering capabilities of Egypt's early kings, and there is no need to create outlandish theories to explain its construction.

Giza remained important through the New Kingdom and Third Intermediate Period, and on into the Late Period. Significant monuments from these later eras include a New Kingdom temple to the Sphinx and a Temple of Isis (an expansion of the mortuary chapel of one of the queens' pyramids next to the Great Pyramid). 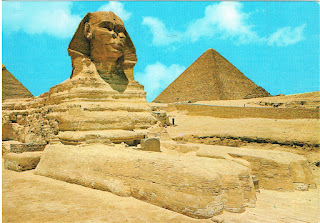 The Great Sphinx and the Kheops Pyramid postcard 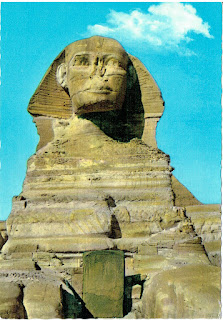 The Great Sphinx of Giza (Arabic: أبو الهول‎ Abū al-Haul, English: The Terrifying One; literally: Father of Dread), commonly referred to as the Sphinx, is a limestone statue of a reclining or couchant sphinx (a mythical creature with a lion's body and a human head) that stands on the Giza Plateau. The face of the Sphinx is generally believed to represent the face of the Pharaoh Khafra. 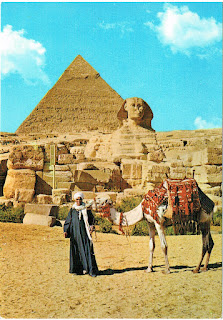 The Great Sphinx and the Khephren Pyramid postcard


The Pyramid of Khafre or of Chephren is the second-tallest and second-largest of the Ancient Egyptian Pyramids of Giza and the tomb of the Fourth-Dynasty pharaoh Khafre (Chefren), who ruled from c. 2558 to 2532 BC.
Posted by ikouneni at 4:44 AM

Email ThisBlogThis!Share to TwitterShare to FacebookShare to Pinterest
Labels: Egypt