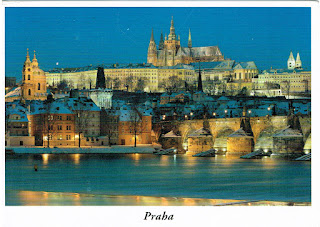 This postcard was sent by Eva and Martin from Prague via Postcrossing [CZ 723885].

It is postmarked in 19 October 2015 from Praha, Czech Republic. I really like these stamps. The first one depicts the sign of Aquarius. The second one depicts Ottokar II (Czech: Přemysl Otakar II; c. 1233 – 26 August 1278), the Iron and Golden King, who was a member of the Přemyslid dynasty who reigned as King of Bohemia from 1253 until 1278. He also held the titles of Duke of Austria from 1251, Duke of Styria from 1260, as well as Duke of Carinthia and Margrave of Carniola from 1269.

With Ottokar's rule, the Přemyslids reached the peak of their power in the Holy Roman Empire. His expectations of imperial crown, however, were never fulfilled. [wikipedia]
Posted by ikouneni at 1:13 PM