A few weeks ago my parents went to the beautiful island of Tinos in Greece and they sent me these postcards. They were mesmerized by the picturesque villages and the amazing beaches.


Tinos (Greek: Τήνος) is a Greek island situated in the Aegean Sea. It is located in the Cyclades archipelago. In antiquity, Tinos was also known as Ophiussa (from ophis, Greek for snake) and Hydroessa (from hydor, Greek for water). The closest islands are Andros, Delos, and Mykonos. It has a land area of approximately 194 square kilometres (75 sq mi) and a 2011 census population of 8,636 inhabitants.

Tinos is famous amongst Greeks for the Church of Panagia Evangelistria, its 80 or so windmills, about 1000 artistic dovecotes, 50 active villages and its Venetian fortifications at the mountain, Exomvourgo. On Tinos, both Greek Orthodox and Roman Catholic populations co-exist, and the island is also well known for its famous sculptors and painters, such as Nikolaos Gysis, Yannoulis Chalepas and Nikiforos Lytras.

The island is located near the geographical center of the Cyclades island complex, and because of the Panagia Evangelistria church, with its reputedly miraculous icon of Virgin Mary that it holds, Tinos is also the center of a yearly pilgrimage that takes place on the date of the Dormition of the Virgin Mary (15 August, "Dekapentavgoustos" in Greek). This is perhaps the most notable and still active yearly pilgrimage in the region of the eastern Mediterranean. Many pilgrims make their way the 800 metres from the ferry wharf to the church on their hands and knees as sign of devotion. [wikipedia] 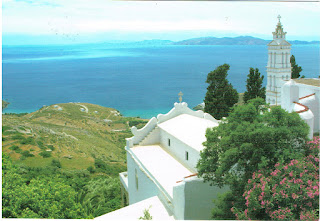 This postcard shows Our Lady of Kardiani [Greek: Κιουρά Παναγιά της Καρδιανής]. This church is over 1000 years old and lies in the 17th century village of Kardiani with its marble-laden village houses. The village itself is worth a visit as it hangs over the rocks and boasts spectacular views of the sea. Nearby there is a cemetery dating from the 9th century BC. 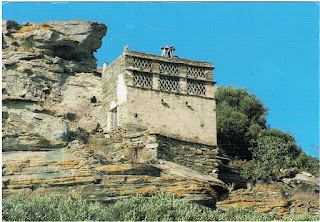 This is a Pigeon House or Dovecote in Isternia. The island of Tinos is famous for the many intricately designed dovecotes found here. They are fortress like stone structures with two levels of which the lower level is usually used to store utensils and other items. It is decorated with both geometric patterns including triangles and rhomboids and non-geometric patterns including cypress tress and variations of the sun. It is believed that these elaborate patterns are the reason why the pigeons are attracted to these dovecotes. As opposed to dovecotes in other parts of Greece, the ones in Tinos are much more than just simple wooden boxes set on poles. These dovecotes are usually built in the countryside at specific locations near cultivated areas and where water is easily available. They are mainly built on slopes at a certain angle keeping the wind and the surroundings in mind to make the takeoffs and landings easier for the doves. The dove nests are square holes in single or double rows in the wall of the dovecote. Small stone slabs that protrude under the homes create a perch for the birds. 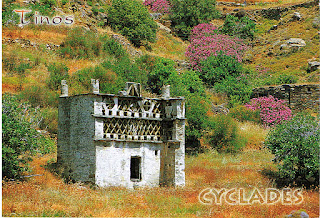 Today, you will spot plenty of dovecotes near Komi, Krokos Village, Tarabados Valley and Kardiani Village. Though the exact number of these dovecotes is not known, it can be said for a fact that it exceeds six hundred. Dovecotes have also influenced Tinos architecture in general so much so that you will even see some houses built in the same way today. The best thing about them is that they are very well preserved many are still in use and can be found all over the island. These dovecotes are unique masterpieces and in many ways are trademarks of the island of Tinos. [Source: www.greeka.com]
Posted by ikouneni at 1:33 AM