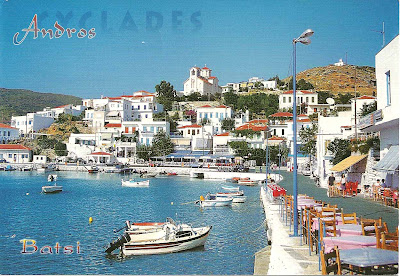 This is Andros, one of my favorite islands. It is also called the island of the wealthy ship-owners [in Greek it's just one word : εφοπλιστές]. It is 379,7 km2 and its coastline is 176 km. It is a rather quiet island with only a few tourists, even though it is very close to Athens [only an hour and a half by boat]. From many years ago the biggest part of the population were fishermen and ship-owners. Many of them became very wealthy and their families have a big part in Greek economy. It is said, that these rich families keep the tourists away from the island [every year there are fewer boats to and from Andros].
In Andros there is one of the most important museums of modern art in Greece [www.moca-andros.gr]. If you ever visit the island you must definitely taste fourtalia [scrambled eggs with potatoes and sausages]. As for the beaches I have to warn you that the roads of the island are not very well, but they worth it! My favorite ones are: