Tavern of the seas | South Africa 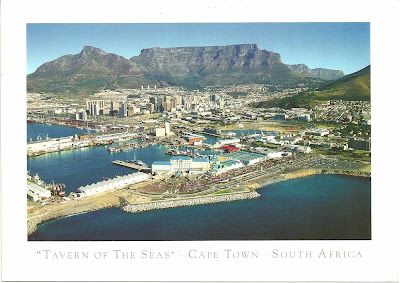 Another beautiful card sent by Rosey from South Africa.


In 1700 Cape Town lacked the sophistication of Amsterdam, or the exotic attractions of Batavia, and visitors commented upon the problems of rough roads, wandering animals and open sewage, but it was generally rated an attractive town, and particularly welcome after months at sea.

Wealthy visitors could find rooms in the finer houses and wrote of the abundant, fresh food and the dancing laid on for their enjoyment. There was also a wine shop, that offered tours of Table Mountain, complete with hampers carried by slave porters.

Sailors found their way to boarding houses and tented camps, and filled up the taverns, which had a reputation for prostitutes and brawls with the local soldiers. 'The Scottish Temple' was a popular bar and brothel and it prospered for much of the century. Cape Town lived up to its nickname 'Tavern of the Seas'. [www.capetown.at/heritage/history/voc_1700s.htm]
Posted by ikouneni at 2:01 AM