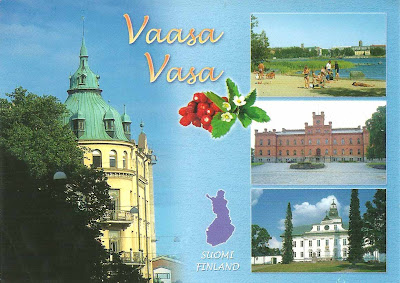 Peppina sent this to me via postcrossing from Vaasa [FI-912874]. As Peppina writes, Vaasa is an over 400 years old town in Finland!

Over the years, Vaasa has changed its name several times, due to alternative spellings, political decisions and language condition changes. At first it was called Mustasaari or Mussor after the village where it was founded in 1606, but just a few years later the name was changed to Wasa to honor the royal Swedish lineage. The city was known as Wasa between 1606 and 1855, Nikolaistad (Swedish) and Nikolainkaupunki (Finnish) between 1855 and 1917, Vasa (Swedish) and Vaasa (Finnish) beginning from 1917, with the Finnish name being the primary name from ca 1930 when Finnish speakers became the majority in the city. [http://en.wikipedia.org/wiki/Vaasa]
Posted by ikouneni at 10:41 AM