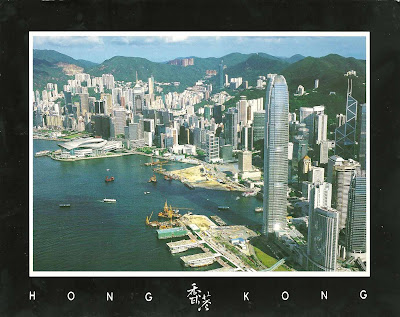 Another postcrossing card [HK-20591], this time from Hong Kong.

This is Victoria Harbour, a natural landform harbour situated between Hong Kong Island and the Kowloon Peninsula in Hong Kong. The harbour's deep, sheltered waters and strategic location on the South China Sea was instrumental in Hong Kong's establishment as a British colony and its subsequent development as a trading centre. Throughout its history, the harbour has seen numerous reclamation projects undertaken on both shores, but still retains its founding role as a port for thousands of international vessels each year.
Long famous for its spectacular views, the harbour is a major tourist attraction of Hong Kong. Lying in the middle of the territory's dense urban region, the harbour is the site of annual fireworks displays and its promenades are popular gathering places for tourists and residents. [wikipedia]
Posted by ikouneni at 7:26 AM