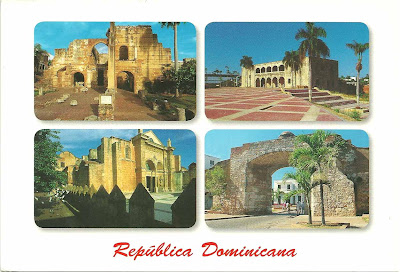 Another card from Shallale, this time from Dominican Republic, where she lived years back. Usually I don't like multi-view cards, but after some reading I had, I understood that these four sites are the Colonial Zone of Santo Domingo and  they are listed as a whole at Unesco World Heritage Sites. For more details about each one, read below.

At the top left, I think it is the Fortaleza Ozama, a sixteenth-century castle which lies at the entrance to Santo Domingo and overlooking the Ozama River. Named after this river, the castle, also referred to as "La Fortaleza", is the oldest formal military construction still standing in America. An impressive architectural structure of medieval style and design, the Tower of Homage (in Spanish: Torre del Homenaje) stands in the center of the grounds. The castle was designed to guard the entrance to the port of Santo Domingo, and defend the city from seaborne enemies. Construction began in 1502. It was well-built enough to serve as a prison until the 1960s, when the prison was closed, the "Fortaleza" was restored and it opened to the public. It is located at the end of Las Damas Street. [wikipedia]

At the top right, you can see the Alcázar de Colón, or Columbus Alcazar, located in Santo Domingo, which is the oldest Viceregal residence in America, and forms part of the Colonial Zone of Santo Domingo World Heritage Site. The building houses the Museo Alcázar de Diego Colón, whose collection exhibits the Caribbean's most important ensemble of European late medieval and Renaissance works of art, which were acquired in the 1950s. The palace is an impressive construction of coralline blocks that once housed some fifty rooms and a number of gardens and courtyards, although what remains today is about half the size it once was. It was built under Diego Colón, the son of Christopher Columbus; when he became Viceroy of La Española and the Indies in 1509, he ordered the construction of a family home and governor’s mansion between 1510 and 1512. [wikipedia]

On the bottom left you can see the Cathedral of Santa María la Menor in Santo Domingo, which is the oldest cathedral in the Americas, begun in 1514 and completed in 1540. Fronted with a golden-tinted coral limestone façade, the church combines elements of both Gothic and Baroque with some lavish plateresque styles as exemplified by the high altar chiseled out of silver. The treasury has an excellent art collection of ancient woodcarvings, furnishings, funerary monuments, silver, and jewelry. Some historians believe that the remains which used to rest in the cathedral, before being removed to the Colombus Lighthouse, are those of famed navigator Christopher Columbus. [wikipedia]

At the bottom right, I think it is La Puerta del Conde (The Count's Gate), where Francisco del Rosario Sanchez, one of the Dominican Founding Fathers, proclaimed Dominican independence and raised the first Dominican Flag, on February 27, 1844. The gate is part of a structure called El Baluarte del Conde (The Count's Bulwark), a fort in Ciudad Colonial, the colonial area of Santo Domingo. The fort was part of a larger system of fortifications that ran along a defensive wall which surrounded Ciudad Colonial. The Altar of the Fatherland and Independence Park are located there. [wikipedia]
Posted by ikouneni at 3:42 AM