Today was a good day for my mailbox!! As I returned tired from work, I found six cards waiting for me :D

The first one was this: 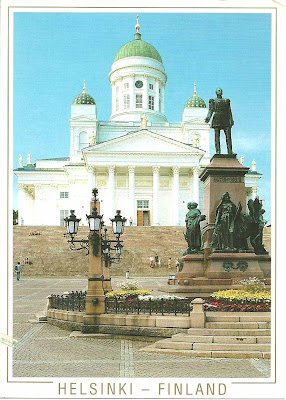 It was sent by Pirjo via postcrossing [FI-925057]. As Pirjo writes, this is the Senate square, a very popular meeting place. Many people enjoy sitting at the stairs in the background and watching other people going by.
On the right you can see a statue of emperor Alexander II. The statue, erected in 1894, was built to commemorate his re-establishment the Diet of Finland in 1863, as well as his initiation of several reforms that increased Finland's autonomy from Russia. The statue comprises Alexander on a pedestal surrounded by figures representing the law, culture and the peasants.
During the Russification of Finland from 1899 onwards, the statue became a symbol of quiet resistance, with people of Helsinki protesting to the decrees of Nicholas II leaving flowers at the foot of the statue of his grandfather, then known in Finland as "the good czar".
After Finland's independence in 1917, demands were made regarding the removal of the statue, and later, a suggestion was made that it should be replaced with the equestrian statue of Mannerheim (currently located along Mannerheimintie, near Eduskuntatalo). Nothing came of either of these suggestions, and today the statue is one of the major tourist landmarks on the city, standing as a monument to Finland's relationship with Imperial Russia. [wikipedia]