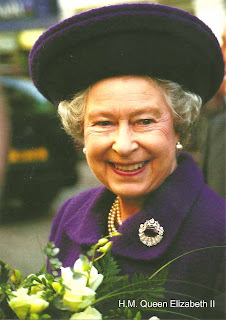 I went to London for New Year's Eve and I had a great time! Although it was chilling cold, we walked a lot and managed to see a big part of this almost magical city! I -as expected- bought and sent a lot of cards. One of my favorites was this one. Too bad we didn't see her in person :P

Elizabeth II (Elizabeth Alexandra Mary, born 21 April 1926) is the reigning queen and head of state of 16 independent sovereign states known as the Commonwealth realms: the United Kingdom, Canada, Australia, New Zealand, Jamaica, Barbados, the Bahamas, Grenada, Papua New Guinea, the Solomon Islands, Tuvalu, Saint Lucia, Saint Vincent and the Grenadines, Belize, Antigua and Barbuda, and Saint Kitts and Nevis. In addition, as Head of the Commonwealth, she is the figurehead of the 54-member Commonwealth of Nations and, as the British monarch, she is the Supreme Governor of the Church of England.


Elizabeth was educated privately at home. Her father, George VI, became King-Emperor of the British Empire in 1936. She began to undertake public duties during the Second World War, in which she served in the Auxiliary Territorial Service. After the war and Indian independence George VI's title of Emperor of India was abandoned, and the evolution of the Empire into the Commonwealth accelerated. In 1947, Elizabeth made the first of many tours around the Commonwealth, and married Prince Philip, Duke of Edinburgh. They have four children: Charles, Anne, Andrew, and Edward.
In 1949, George VI became the first Head of the Commonwealth, a symbol of the free association of the independent countries comprising the Commonwealth of Nations. On his death in 1952, Elizabeth became Head of the Commonwealth, and constitutional monarch of seven independent Commonwealth countries: the United Kingdom, Canada, Australia, New Zealand, South Africa, Pakistan, and Ceylon. Her coronation in 1953 was the first to be televised. During her reign, which at 58 years is one of the longest for a British monarch, she became queen of 25 other countries within the Commonwealth as they gained independence. Between 1956 and 1992, half of her realms, including South Africa, Pakistan, and Ceylon (renamed Sri Lanka), became republics.
In 1992, which Elizabeth termed her annus horribilis, meaning horrible year, two of her sons separated from their wives, her daughter divorced, and a severe fire destroyed part of Windsor Castle. Revelations on the state of her eldest son Charles's marriage continued, and he divorced in 1996. The following year, her former daughter-in-law Diana, Princess of Wales, died in a car crash in Paris. The media criticised the royal family for remaining in seclusion in the days before Diana's funeral, but Elizabeth's personal popularity rebounded once she had appeared in public and has since remained high. Her Silver and Golden Jubilees were celebrated in 1977 and 2002 respectively, and planning for her Diamond Jubilee in 2012 is underway. [wikipedia]

You can see my postcard collection on the map below (I am still uploading them, so you can only see part of my collection):