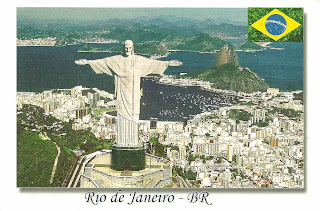 I received this postcard two weeks ago. It was sent by MarianaReis via postcrossing [BR-151907]. It is pretty weird that it took 267 days to travel from Rio de Janeiro, Brazil, to Athens, Greece!! I'm just happy it finally reached me! :)

Rio de Janeiro (River of January), commonly referred to simply as Rio, is the capital city of the State of Rio de Janeiro, the second largest city of Brazil, and the third largest metropolitan area and agglomeration in South America, boasting approximately 6.3 million people within the city proper, making it the 6th largest in the Americas, and 26th in the world.
The city was the capital of Brazil for nearly two centuries, from 1763 to 1815 during the Portuguese colonial era, 1815 to 1821 as the capital of the United Kingdom of Portugal, Brazil and Algarves, 1822 to 1960 as an independent nation. Rio is nicknamed the Cidade Maravilhosa or "Marvelous City."


Rio de Janeiro represents the second largest GDP in the country (and 30th largest in the world in 2008), estimated at about R$ 343 billion (IBGE/2008) (nearly US$ 201 billion), and is the headquarters of two major Brazilian companies – Petrobras and Vale, and major oil companies and telephony in Brazil, besides the largest conglomerate of media and communications companies in Latin America, the Globo Organizations. The home of many universities and institutes, it is the second largest center of research and development in Brazil, accounting for 17% of national scientific production – according to 2005 data.
Rio de Janeiro is the most visited city in the southern hemisphere and is known for its natural settings, carnival celebrations, samba, Bossa Nova, balneario beaches such as Barra da Tijuca, Copacabana, Ipanema, and Leblon. Some of the most famous landmarks in addition to the beaches include the giant statue of Christ the Redeemer ('Cristo Redentor') atop Corcovado mountain, named one of the New Seven Wonders of the World; Sugarloaf mountain (Pão de Açúcar) with its cable car; the Sambódromo, a permanent grandstand-lined parade avenue which is used during Carnival; and Maracanã Stadium, one of the world's largest football stadiums. The 2016 Summer Olympics will take place in Rio de Janeiro, which will mark the first time a South American city hosts the event. Rio's Maracanã Stadium will also host the final match for 2014 FIFA World Cup. Rio de Janeiro will also host World Youth Day in 2013.

Christ the Redeemer (Portuguese: Cristo Redentor) is a statue of Jesus Christ in Rio de Janeiro, Brazil; considered the largest Art Deco statue in the world and the 5th largest statue of Jesus in the world. It is 39.6 metres (130 ft) tall, including its 9.5 metres (31 ft) pedestal, and 30 metres (98 ft) wide. It weighs 635 tonnes (625 long,700 short tons), and is located at the peak of the 700-metre (2,300 ft) Corcovado mountain in the Tijuca Forest National Park overlooking the city. A symbol of Brazilian Christianity, the statue has become an icon for Rio de Janeiro and Brazil. It is made of reinforced concrete and soapstone, and was constructed between 1922 and 1931. [wikipedia]
Posted by ikouneni at 11:40 PM