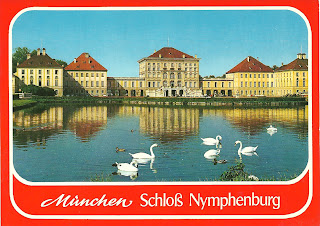 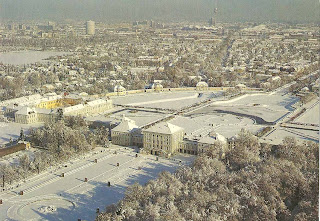 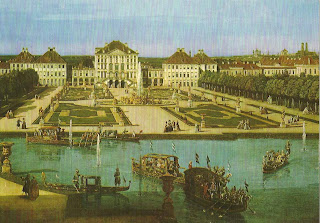 These three postcards show Schloss Nymphenburg in Germany. I have bought them many years ago!

Nymphenburg Palace owes its foundation as a summer residence to the birth of the long-awaited heir to the throne, Max Emanuel, who was born in 1662 to the Bavarian Elector Ferdinand Maria and his wife, Henriette Adelaide of Savoy, after some ten years of marriage. 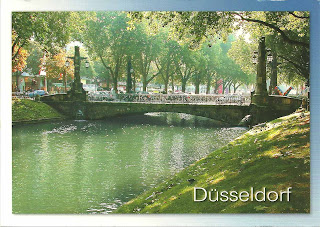 This postcard from Düsseldorf was sent by another of my postcard pals, Chris. She writes: "Düsseldorf is the state capital of North Rhine - Westphalia. Düsseldorf has a beautiful old town. On the card you can see the Ko, a boulevard with a canal running in the middle of it. It has many luxury stores of well-known brands. It's too expensive, but it's nice to walk along the street and just to do some window-shopping."
Well,  it sure looks amazing on the card and the description of Chris makes it even more appealing. Hope I'll do window - shopping at Ko boulevard someday, too!! 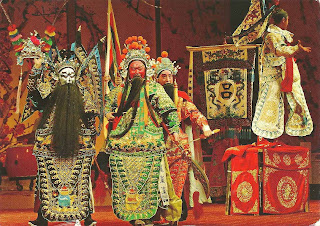 Another postcard from Peking Opera, this time sent by my postcard pal Valerie! She sent this one as she was on her way to Vancouver and had a transfer in Beijing. The card shows "the stage of Peking Opera, an expressive demonstration of reproducing largeness through triviality".

For more information about Peking Opera see this post. 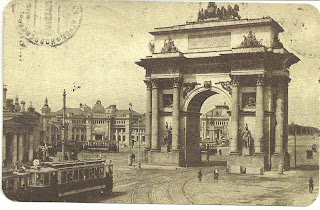 This beautiful vintage postcard was sent by Valerie, my postcard-pal. It shows Belorusskiy Railway Station in Moscow. 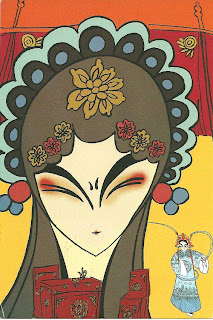 This beautiful postcard was sent by ShengSheng from China as a private swap! It is from "Peking Opera" and the dynasty on the card is "The Three Kingdoms".

Email ThisBlogThis!Share to TwitterShare to FacebookShare to Pinterest
Labels: China 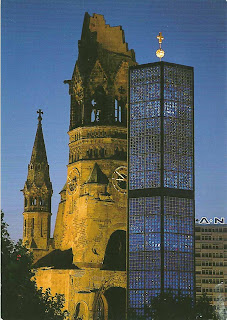 Another postcard of Protestant Kaiser Wilhelm Memorial Church (in German: Kaiser-Wilhelm-Gedächtniskirche, but mostly just known as Gedächtniskirche), sent by Florian via postcrossing [DE-855510]. As Florian writes "the original memorial church was damaged in the WWII. After the war the ruin was conserved as a memorial against the war and a new part was built."

Posted by ikouneni at 2:12 AM No comments: 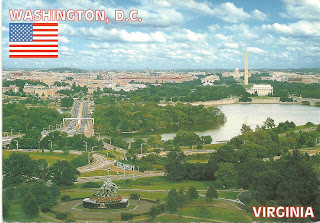 This postcard was sent by Melissa from USA via postcrossing [US-1019633]. It shows "on the west bank of the mighty Potomae River the Marine Corps War Memorial Iwo Jima, adjacted to the world-famous Arlington Cemetary. On the opposite bank is the Linkoln Memorial, the Washington Monumet and the US Capitol in Washington D.C."

Washington, D.C., formally the District of Columbia and commonly referred to as Washington, the District, or simply D.C., is the capital of the United States founded on July 16, 1790. The U.S. Constitution allows for the creation of a special district to serve as the permanent national capital. The District is therefore not a part of any U.S. state and is instead directly overseen by the federal government. Within the District, a new capital city was founded in 1791 and named in honor of George Washington. The City of Washington, along with Georgetown and outlying areas within the federal district, were placed under a single, unified government following an act of Congress in 1871. It is for this reason that the city, while legally named the District of Columbia, is known as Washington, D.C. The city shares its name with the U.S. state of Washington located on the country's Pacific coast.

...from the town where Shakespeare was born 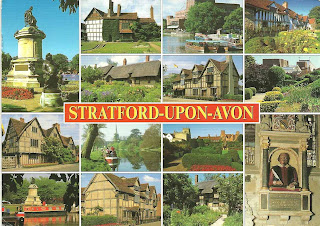 A friend went to Stratford a few days ago and she found time to send me this postcard "from the town where Shakespeare was born".


Stratford-upon-Avon is a market town and civil parish in south Warwickshire, England. It lies on the River Avon, 22 miles (35 km) south east of Birmingham and 8 miles (13 km) south west of Warwick. It is the largest and most populous town of the District of Stratford-on-Avon, which uses the term "on" to indicate that it covers a much larger area than the town itself. Four electoral wards make up the urban town of Stratford; Alveston, Avenue and New Town, Mount Pleasant and Guild and Hathaway. The estimated total population for those wards in 2007 was 25,505.
The town is a popular tourist destination owing to its status as birthplace of the playwright and poet William Shakespeare, receiving about three million visitors a year from all over the world. The Royal Shakespeare Company resides in Stratford's Royal Shakespeare Theatre, one of Britain's most important cultural venues. 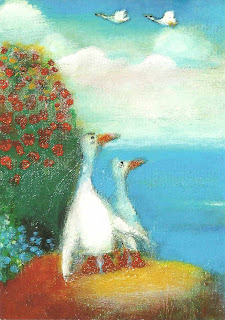 Another postcrossing card [FI-1028649] this time from Marjo from Finland.
Posted by ikouneni at 1:28 AM No comments: 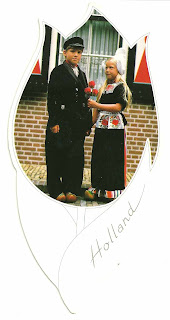 This beautiful tulip-shaped postcard was sent by Veronique from the Netherlands via postcrossing [NL-572183].

The tulip is a perennial, bulbous plant with showy flowers in the genus Tulipa, which comprises 109 species and belongs to the family Liliaceae. The genus's native range extends from as far west as Southern Europe, North Africa, Anatolia, and Iran to the Northwest of China. The tulip's centre of diversity is in the Pamir, Hindu Kush, and Tien Shan mountains. Although tulips are often associated with The Netherlands, commercial cultivation of the flower began in the Ottoman Empire. The tulip, or lale (from Persian لاله, lâleh) as it is also called in Iran and Turkey, is a flower indigenous to a vast area encompassing parts of Africa, Asia, and Europe. The word tulip, which earlier appeared in English in forms such as tulipa or tulipant, entered the language by way of French tulipe and its obsolete form tulipan or by way of Modern Latin tulīpa, from Ottoman Turkish tülbend ("muslin" or "gauze"), and is ultimately derived from Persian dulband ("turban").

Read more »
Posted by ikouneni at 4:59 AM No comments: 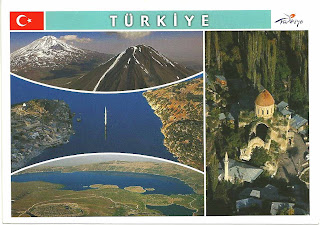 This postcard arrived today!! It was sent by Selin from Turkey via postcarossing [TR-55471]. On top it shows Mount Agri [aka Mount Ararat], in the middle Sanliufra, in the bottom Lake Nemrut and on the wright Osvank Church at Erzurum.


Mount Ararat  is a snow-capped, dormant volcanic cone in Turkey. It has two peaks: Greater Ararat (the tallest peak in Turkey, and the entire Armenian plateau with an elevation of 5,137 m/16,854 ft) and Lesser Ararat (with an elevation of 3,896 m/12,782 ft). The Ararat massif is about 40 km (25 mi) in diameter. The Iran-Turkey boundary skirts east of Lesser Ararat, the lower peak of the Ararat massif. It was in this area that by the Tehran Convention of 1932 a border change was made in Turkey's favor, permitting her to occupy the eastern flank of the massif.
Mount Ararat in Judeo-Christian tradition is associated with the "Mountains of Ararat" where according to the book of Genesis, Noah's ark came to rest. It also plays a significant role in Armenian nationalism and irredentism.
Read more »
Posted by ikouneni at 11:28 AM 1 comment: