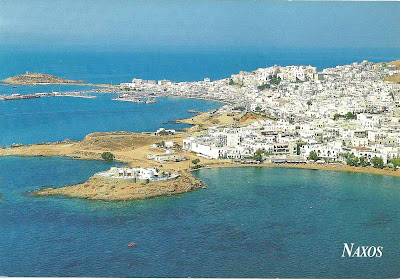 I visited Naxos island many many years ago, but I still remember the vivid blue of its seas. Naxos is a beautiful island with amazing beaches and friendly people!
Naxos (in Greek, Νάξος) is a Greek island, the largest island (429 km2 (166 sq mi)) in the Cyclades island group in the Aegean. It was the centre of archaic Cycladic culture. The largest town and capital of the island is Hora or Naxos City, with 6,533 inhabitants (2001 census). The main villages are Filoti, Apiranthos, Vivlos, Agios Arsenios, Koronos and Glinado. Naxos is a popular tourist destination, with several easily accessible ruins. It has a number of beautiful beaches, such as those at Agia Anna, Agios Prokopios, Alikos, Kastraki, Mikri Vigla, Plaka and Agios Georgios, most of them near Hora. Naxos is the most fertile island of the Cyclades. It has a good supply of water in a region where water is usually inadequate. Mount Zas (999 metres) is the highest peak in the Cyclades, and tends to trap the clouds, permitting greater rainfall. This has made agriculture an important economic sector with various vegetable and fruit crops as well as cattle breeding, making Naxos the most self sufficient island in the Cyclades. Naxos is also known within Greece for its potatoes. [wikipedia]
Posted by ikouneni at 3:50 AM