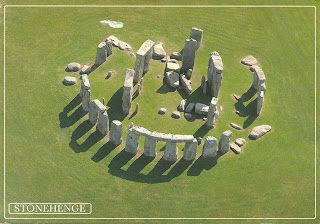 This amazing postcard from Stonehenge was sent by Serena from Great Britain via postcrossing [GB-202486]. It is a postcard of Stonehenge, a Unesco World Heritage Site.


Stonehenge is a prehistoric, mysterious circle of upright stones in southern England. Construction on the great monument began 5,000 years ago; the famous stones that still stand today were put in place about 4,000 years ago.
The great age, massive scale and mysterious purpose of Stonehenge draw over 800,000 visitors per year, and several thousand gather on the summer solstice to watch the sunrise at this ancient and mystical site. The stones are aligned almost perfectly with the sunrise on the summer solstice, and it is almost unquestioned that Stonehenge was built as a spectacular place of worship.

Although the faith of the Stonehenge builders predates any known religion, the site has become a place of pilgrimage and worship for Neopagans who identify themselves with the Druids or other forms of Celtic paganism. It is also popular with New Age devotees, who report powerful energies at the site.

Stonehenge stands in a grassy field in the Wiltshire countryside, and must have been a highly atmospheric site over the millennia since its construction. Unfortunately, in modern times the site has lost a great deal of this atmosphere, thanks to the intersection of two major highways nearby and the inevitable tourist infrastructure. In this regard, Avebury is far superior to Stonehenge.
That said, Stonehenge is such a magnificent monument that it would impress no matter where it is. The astonishing scale and beauty of the stones, the great care and labor in construction, and the mystery that surrounds its original purpose are just some of the reasons Stonehenge is one of the most popular sights in England. And under stormy skies, a fresh snowfall, a rainbow, a full moon, or the rising sun on the summer solstice, it is a mystical site indeed. [sacred-destinations]