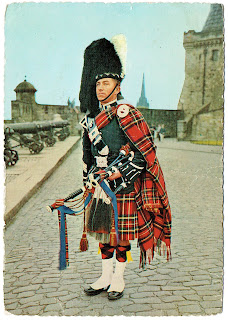 This postcard shows a Pipe Major of the Royal Scots Greys. The Royal Scots Greys was a cavalry regiment of the British Army from 1707 until 1971, when they amalgamated with the 3rd Carabiniers (Prince of Wales's Dragoon Guards) to form The Royal Scots Dragoon Guards (Carabiniers and Greys). The regiment's history began in 1678, when three independent troops of Scots Dragoons were raised. In 1681, these troops were regimented to form The Royal Regiment of Scots Dragoons, numbered the 4th Dragoons in 1694. They were already mounted on grey horses by this stage and were already being referred to as the Grey Dragoons. In 1707, they were renamed The Royal North British Dragoons (North Britain then being the envisaged common name for Scotland), but were already being referred to as the Scots Greys. In 1713, they were renumbered the 2nd Dragoons as part of a deal between the commands of the English Army and the Scottish Army when the two were in the process of being unified into the British Army. They were also sometimes referred to, during the first Jacobite uprising, as Portmore's Dragoons. In 1877, their nickname was finally made official when they became the 2nd Dragoons (Royal Scots Greys), which was inverted in 1921 to The Royal Scots Greys (2nd Dragoons). They kept this title until 2 July 1971, when they amalgamated with the 3rd Carabiniers, forming the Royal Scots Dragoon Guards. [wikipedia]
Read more »
Posted by ikouneni at 2:02 PM No comments:

I recently went to Land's End in Cornwall (England) with some friends. I was blown away by the beautiful scenery. 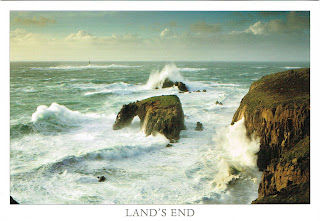 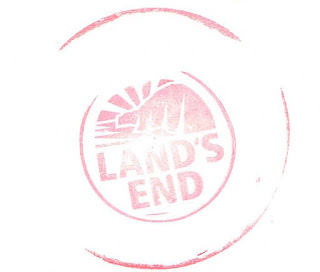 Land's End (Cornish: Penn an Wlas or Pedn an Wlas) is a headland and holiday complex in western Cornwall, England. It is the most westerly point of mainland Cornwall and England, is within the Penwith peninsula and is about eight miles (13 km) west-south-west of Penzance at the western end of the A30 road.
Read more »
Posted by ikouneni at 1:05 PM No comments:

1870-1990 Holmfirth, England  James Bamforth began his career as a manufacturer of lantern slides. In 1890 he started production of illustrated song lyric slides that audiences could sing along to at shows. This quickly became his most popular selling item. In the years following, the Company became the largest producer of model slides. From this vast photo inventory Bamforth began to publish of a variety of postcard types including comics, greetings, propaganda, real photos, and views, but especially song sets, many of which were reproduced from lantern slide images. Today they are best remembered for their series of saucy seaside postcards, which may have numbered close to a 100,000 different titles. While this series was begun in 1902, they did not become very popular until the 1930’s. In 1906 Bamforth opened a New York Office at 35 West 21st Street. By 1910 they had become a Limited company. The Company was sold to ETW Dennis, but in 2000 the rights to their images was purchased by Ian Walker. [source] 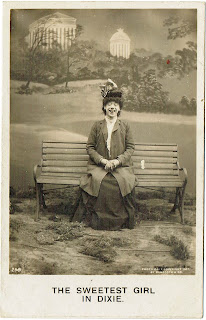 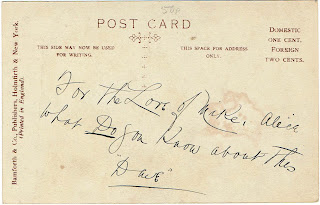 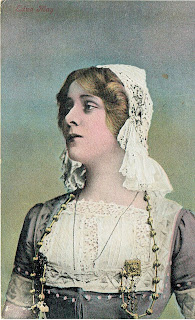 This is one more postcard I found in St Ives. I researched a bit but I couldn't find any information about the woman pictured or the costume she is wearing. I finally found who she is! Read all about her here! 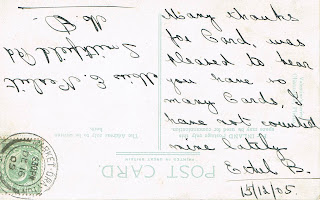 On the back it reads: 'Many thanks for card, was pleased to hear you have so many cards. I have not counted mine lately.
Eathel B.
15/12/05.

The postcard was posted on 16 December 1905 at 8:30pm from Market Drayton with a half pence stamp picturing King Edward VII. Stamps for King Edwards reign were issued on 1st January 1902 until 1910. The inland postage rate for postcards was ½d (halfpenny) throughout this period.
Market Drayton is a market town in north Shropshire, England, close to the Welsh and Staffordshire border. It is on the River Tern, between Shrewsbury and Stoke-on-Trent, and was formerly known as "Drayton in Hales" (c. 1868) and earlier simply as "Drayton" (c. 1695). In 1245 King Henry III granted a charter for a weekly Wednesday market, giving the town its current name. The market is still held every Wednesday.

Wow! It's been so long since I last uploaded a postcard here! I went to St Ives in Cornwall for Easter with some friends. In this small, picturesque town I found the cutest little vintage shop, selling old toys and postcards. One of my finds is this postcard: 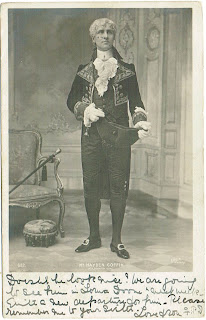 This dapper gentleman immediately caught my eye. As you can see his name is Mr Hayden Coffin and he starred in 'A Country Girl'. Below the photograph it reads: 'Doesn't he look nice? We are going to see him in "Lorna Doone" [...] quite a new caricature (?) for him. Please remember me if you see him. Love & love (?) F. P. I.'
Charles Hayden Coffin (22 April 1862 – 8 December 1935) was an English actor and singer known for his performances in many famous Edwardian musical comedies, particularly those produced by George Edwardes. Hayden achieved fame as Harry Sherwood in Dorothy (1886), which became the longest-running piece of musical theatre in history up to that time; other similar roles followed. In 1893, he joined the company of George Edwardes and starred in a series of extraordinarily successful musical comedies.