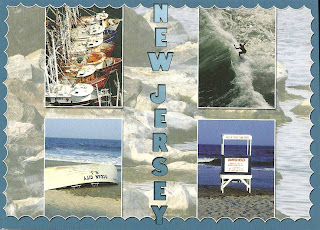 This postcard was sent by Lorraine from New Jersey via postcrossing [US-1381433].

New Jersey is a state in the Northeastern and Middle Atlantic regions of the United States of America. As of the United States 2010 Census, its population was 8,791,894. It is bordered on the north and east by the state of New York, on the southeast and south by the Atlantic Ocean, on the west by Pennsylvania and on the southwest by Delaware. New Jersey lies mostly within the sprawling metropolitan areas of New York City and Philadelphia and is the most densely populated state in the United States. It is also the third wealthiest by 2009-2010 median household income.
The area was inhabited by Native Americans for more than 2,800 years, with historical tribes such as the Lenape along the coast. In the early 17th century, the Dutch and the Swedes made the first European settlements. The British later seized control of the region, naming it the Province of New Jersey. It was granted as a colony to Sir George Carteret and John Berkeley, 1st Baron Berkeley of Stratton. At this time, it was named after the largest of the British Channel Islands, Jersey, where Carteret had been born. New Jersey was the site of several decisive battles during the American Revolutionary War.
In the 19th century, factories in cities such as Elizabeth, Paterson, and Trenton helped to drive the Industrial Revolution. New Jersey's position at the center of the Northeast megalopolis, between Boston, New York City, Philadelphia, Baltimore, and Washington, D.C., fueled its rapid growth through the suburban boom of the 1950s and beyond.
The Governor of New Jersey is Republican Chris Christie, who assumed office in 2010. [wikipedia]
Posted by ikouneni at 10:40 AM No comments: 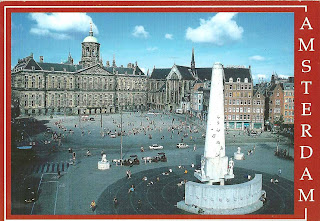 This postcard was sent by Anja from Amsterdam via postcrossing [NL-858186]. I have never been to the Netherlands, but it looks very nice!

Its name is derived from Amstelredamme, indicative of the city's origin: a dam in the river Amstel. Settled as a small fishing village in the late 12th century, Amsterdam became one of the most important ports in the world during the Dutch Golden Age, a result of its innovative developments in trade. During that time, the city was the leading center for finance and diamonds. In the 19th and 20th centuries, the city expanded, and many new neighbourhoods and suburbs were formed. The 17th-century canals of Amsterdam (in Dutch: 'Grachtengordel'), located in the heart of Amsterdam, were added to the UNESCO World Heritage List in July 2010.

The city is the financial and cultural capital of the Netherlands. Many large Dutch institutions have their headquarters there, and 7 of the world's top 500 companies, including Philips and ING, are based in the city. In 2010, Amsterdam was ranked 13th globally on quality of living by Mercer, and previously ranked 3rd in innovation by 2thinknow in the Innovation Cities Index 2009.

This picturesque view of Pont Neuf in Paris was sent by Alexandra via postcrossing [FR-173795]. It reminds me of a wonderful movie I saw recently, called "Midnight in Paris". So, instead of writing some words of this amazing city, I give you the soundtrack of the movie. Listen to it and travel to Paris!