How do you store your postcards?

The last few days I've thinking about my postcards. For the time being, I am filing them in geographical order. But since I was given a huge amount of old family postcards (read more about it here) I've been thinking that it may be better if I separate the written from the unwritten. The unwritten could be organized geographically and the written ones by date. So, the written ones could be something like a family calendar (the oldest one is from1909!!!).

What do you think? What filing system do you use for your postcards?
Posted by ikouneni at 9:25 AM No comments: 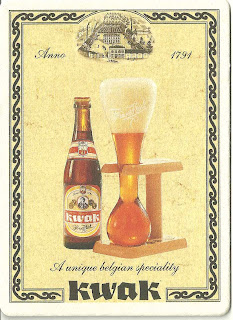 Bosteels Brewery is a beer brewery in Buggenhout, Belgium. The brewery was founded in 1791 and is still owned and operated by the same family, now its seventh generation. They brew three beers: Tripel Karmeliet, DeuS, and Pauwel Kwak.


Pauwel Kwak is an amber brewed since the 1980s with 8.4% ABV. Supposedly it is named after an 18th century innkeeper and brewer, Pauwel Kwak. The beer is filtered before packaging in bottles and kegs.
As with other Belgian beers, Kwak has a branded glass with its own distinctive shape. It is held upright in a wooden stand; the brewery claims the glass was designed by the innkeeper Pauwel Kwak in the early 19th century for coachmen who would stop at his coaching tavern and brewery named "De Hoorn". though the beer and the glass were launched in the 1980s. While drinking from the glass, the bulb at the bottom will remain filled for a relatively long time. As soon as air reaches the still-filled bulb, a large amount of beer will gush towards the drinker. This is accompanied by a characteristic sound which sounds like Kwak spoken quickly. [wikipedia]
Posted by ikouneni at 7:36 AM No comments:

Email ThisBlogThis!Share to TwitterShare to FacebookShare to Pinterest
Labels: Belgium

wow! It;s been a while since I last wrote here. Unfortunately, there were a lot going on in my life lately. I hope from now on I will have more free time to upload postcards! I'm looking forward for your comments! 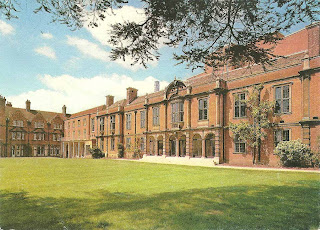 This is a postcard showing Somerville College in Oxford. It was sent by my aunt to my mother on 19 September 1990, when she was studying to be a doctor.

Somerville College is one of the constituent colleges of the University of Oxford in England, and was one of the first women's colleges to be founded there. The college is located at the southern end of Woodstock Road, with Little Clarendon Street to the south and Walton Street to the west.
In June 1878, the Association for the Higher Education of Women was formed, aiming for the eventual creation of a college for women in Oxford. Some of the more prominent members of the association were Dr. G. G. Bradley, Master of University College, T. H. Green, a prominent liberal philosopher and Fellow of Balliol College, and Edward Stuart Talbot, Warden of Keble College. Talbot insisted on a specifically Anglican institution, which was unacceptable to most of the other members. The two parties eventually split, and Talbot's group founded Lady Margaret Hall.
Thus, in 1879, a second committee was formed to create a college "in which no distinction will be made between students on the ground of their belonging to different religious denominations."  This new effort resulted in the founding of Somerville Hall, named for the then recently deceased Scottish mathematician Mary Somerville. The hall was renamed Somerville College in 1894.
Somerville College was converted into a hospital during World War I — Robert Graves and Siegfried Sassoon were patients there. Sassoon opens Siegfried's Progress with a reference to the college.
Somerville remained a women's college until 1992, when its statutes were amended to permit male students and fellows; the first male fellows were appointed in 1993, and the first male students admitted in 1994. Today around 50% of students are men. [wikipedia]

Posted by ikouneni at 7:20 AM No comments: