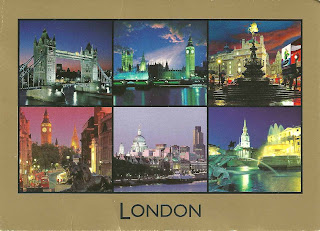 My mother sent me this multi view postcard from London, when she visited my brother a few weeks back. She told me that she posted me three more postcards, but I have only received this one..Hope that I will receive the rest of them soon :)
Posted by ikouneni at 5:28 AM 1 comment: 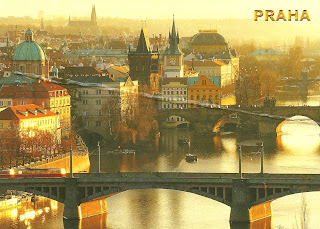 Some very dear friends of mine went to Prague a few weeks ago and sent me this lovely postcard. Even though it was really cold, they had a wonderful time!

Prague, the capital of the Czech Republic, is our most valuable historical city reserve. In 1992 the historical core of the city covering 866 hectares was listed in the UNESCO World Cultural and Natural Heritage Register.
Prague represents a unique collection of historical monuments dominated by the Prague Castle which towers high above the city. It is a display of all artistic styles and movements. The historical core of the city is situated on both banks of the Vltava river and consists of 6 parts - formerly independent urban units unified in the 18th century. They are as follows: Stare Mesto (Old Town), Josefov (the preserved part of the former Jewish Town - today a part of the Old Town), Nove Mesto (New Town), Mala Strana (Lesser Town), Hradcany and Vysehrad. Naturally, most of the historical monuments, museums and galleries are concentrated right there. [praguewelcome.cz] 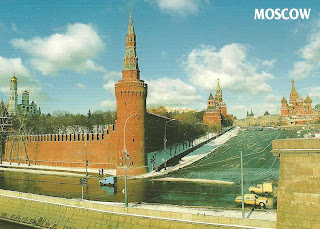 This postcard was sent by Olga from Moscow via postcrossing [RU-624052]. It shows Kremlin's Beklemishevskaya tower.

The Beklemishevskaya Tower is one of the few towers in the Kremlin whose appearance has remained unchanged throughout the ages, and which has not undergone any serious reconstruction. Sometimes referred to as the Moskvoretskaya (Moskva River) Tower due to its proximity to the Moskvoretsky Bridge, it supposedly took its name from the boyar Beklemishev, whose manor lay nearby. The tower was always the first to come under enemy attack, as it was situated at the junction of the Moskva River and the moat. In this respect it served a very important defensive function. At the beginning of the 18th century, during the Northern War between Russia and Sweden, bastions were constructed around the tower, and the loopholes of the tower were widened to accommodate more powerful cannonry.


During the storming of the Kremlin by the Bolsheviks in 1917, the top of the tower was destroyed, but was later restored. The tower is 46.2 metres tall.  [moscow.info]
Posted by ikouneni at 11:10 PM No comments: