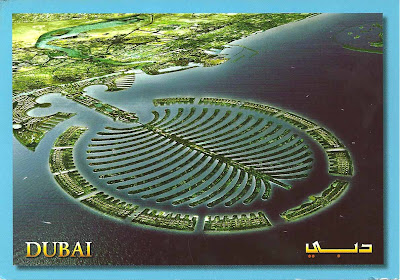 This impressive card was sent to me by Lorena from Dubai as a private swap. I have always wanted to visit those giant manmade islands!

The Palm Islands are artificial archipelago in Dubai, United Arab Emirates, on which major commercial and residential infrastructure will be constructed. They are being constructed by Nakheel Properties, a property developer in the United Arab Emirates, who hired Belgian and Dutch dredging and marine contractor Jan De Nul and Van Oord, some of the world's specialists in land reclamation. The islands are the Palm Jumeirah, the Palm Jebel Ali and the Palm Deira.
Each settlement will be in the shape of a palm tree, topped with a crescent, and will have a large number of residential, leisure and entertainment centers. The Palm Islands are located off the coast of The United Arab Emirates in the Persian Gulf and will add 520 kilometres of beaches to the city of Dubai.
The first two islands will comprise approximately 100 million cubic meters of rock and sand. Palm Deira will be composed of approximately 1 billion cubic meters of rock and sand. All materials will be quarried in the UAE. Among the three islands there will be over 100 luxury hotels, exclusive residential beach side villas and apartments, marinas, water theme parks, restaurants, shopping malls, sports facilities and health spas.
The creation of the Palm Jumeirah began in June 2001. Shortly after, the Palm Jebel Ali was announced and reclamation work began. The Palm Deira, which is planned to have a surface area of 46.35 square kilometres, was announced for development in October 2004. Construction was originally planned to take 10–15 years, but that was before the impact of the global credit crunch hit Dubai.


The Palm Jebel Ali Umar began construction in October 2002 and was expected to be completed in mid 2008. Once it has been completed, it will be encircled by Dubai Waterfront. The project, which is 50 percent larger than the Palm Jumeirah, will include six marinas, a water theme park, 'Sea Village', homes built on stilts, and boardwalks that circle the "fronds" of the "palm" and spell out an Arabic poem by Sheikh Mohammed bin Rashid Al Maktoum:

As of early October 2007, construction of the island was on schedule. The breakwater was completed in December 2006, and infrastructure work began in April 2007. Major construction will not begin until most of the infrastructure work is complete. One of the first buildings on The Palm Jebel Ali is already known. Nakheel invited several architects to design a building on a 300,000 m2 area. The winning design was a building by Royal Haskoning, who also worked on several other projects in Dubai. In the first signs of a slowing Dubai property market, the prices of properties being sold on the Palm Jebel Ali were reported to have fallen by 40% in the two months to November 2008, with the fall being attributed to the Financial crisis of 2007–2010. In 2012, the first phase of four theme parks will open on the Crescent. These parks, which together will be called "World of Discovery", will be developed and operated by the Busch Entertainment Corporation. The parks include SeaWorld, Aquatica, Busch Gardens and Discovery Cove. The World of Discovery will be located at the top of the Crescent, which will form into the shape of an orca (reminiscent of Shamu). [wikipedia]