Reichstag after the fire | Germany

Talking about the Fall of the Berlin War, brought to my mind another old postcard I bought many years ago in Berlin. 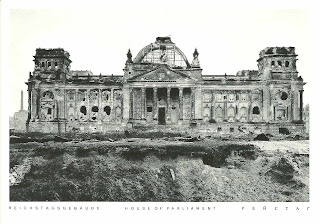 It shows the Reichstag [House of Parliament] before the restoration. It must have been an awful sight.

The building was made safe against the elements and partially refurbished in the 1960s, but no attempt at full restoration was made until after the reunification of Germany on October 3, 1990, when it underwent reconstruction led by internationally renowned architect Norman Foster. After its completion in 1999, it became the meeting place of the modern German parliament, the Bundestag.
The Reichstag as a parliament dates back to the Holy Roman Empire and ceased to act as a true parliament in the years of the Nazi regime (1933–1945). In today's usage, the German term Reichstag or Reichstagsgebäude (Reichstag building) refers to the building, while the term Bundestag refers to the institution. [wikipedia]
Posted by ikouneni at 12:56 AM