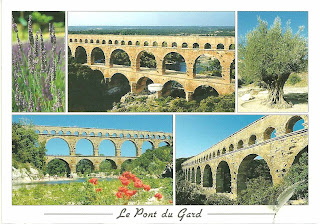 This postcard was sent by Nancy from France via postcrossing [FR-141027]. It shows Le pont du Gard, an aquaduc built by the Romans 2000 years ago! As she writes, she loves going there to enjoy the sun!

The Pont du Gard is a notable ancient Roman aqueduct bridge that crosses the Gard River in southern France. It is part of a 50 km (31 mi) long aqueduct that runs between Uzès and Nîmes in the South of France. It is located in Vers-Pont-du-Gard near Remoulins, in the Gard département. The aqueduct was constructed by the Romans in the 1st century AD and was added to UNESCO's list of World Heritage Sites in 1985. It is the highest of all Roman aqueduct bridges and is the best preserved after the Aqueduct of Segovia.
Read more »
Posted by ikouneni at 1:18 AM 1 comment: 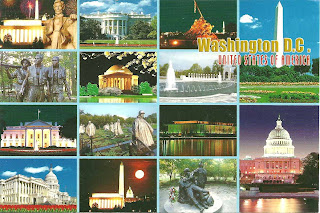 This multi view postcard was sent by Jamie from Wahington D.C. via postcrossing [US-1079058]. It shows the most famous sites of the city! She writes to me: "I live just outside of Washington D.C. It is a place with a lot of history." On the card we can see [at first row from left] Lincoln Memorial, White House, Iwo Jima Memorial. On the second row we can see the 3 Soldiers Vietnam War Statue, Jefferson Memorial, WWII Memorial, Washington Monument. On the third row, White House, Korean War Memorial, the Kennedy Center, the Capitol Building. And in the last row we can see the Capitol Building, Lincoln Memorial and Vietnam Women's Statue.

I have written before about Washington and some of its sights, so I will write now a few words about some of them.
Read more »
Posted by ikouneni at 12:54 AM No comments: 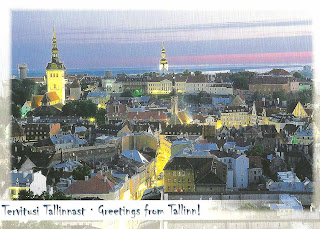 This beautiful card of Tallinn was sent by Ella via postcrossing [EE-98433]. She lives there with her family. She tells me that on the card we can see the old town of Tallinn, which is an Unesco World Heritage Site,  in White Nights. "In June we have White Nights. It is not dark in night: on the card you can see the darkest time (you can read newspaper without extra light)."
Sounds like an incredible experience! I hope I will see it for myself someday :) 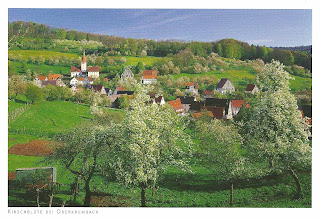 This card shows Cherry blossom near Oberkrumbach, Germany, and it was sent by Angela via postcrossing [DE-877556].

A cherry blossom is the flower of the cherry trees known as sakura (桜 or 櫻; さくら?). In English, "sakura" refers to the Japanese flowering cherry, Prunus serrulata. Cherry fruit (桜んぼ, sakuranbo) comes from another species of tree. Cherry blossoms are indigenous to many East Asian states including Japan, Korea, and China. Japan has a wide variety of cherry blossoms (sakura): well over 200 cultivars can be found there. 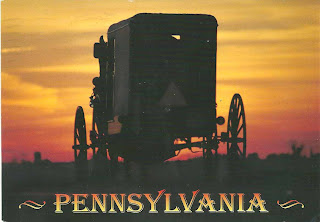 This beautiful postcard was sent by Beth from Pennsylvania via postcrossing [US-1061432]. As she writes, there are a lot of Amish people in that area and "they use horse and buggy instead of cars". I must admit that I know very little about Amish people, but I think that they are misunderstood.

The Amish (Pennsylvania Dutch: Amisch, German: Amische), sometimes referred to as Amish Mennonites, are a group of Christian church fellowships that form a subgroup of the Mennonite churches. The Amish are known for simple living, plain dress and reluctance to adopt many conveniences of modern technology. The history of the Amish church began with a schism in Switzerland within a group of Swiss and Alsatian Anabaptists in 1693 led by Jakob Ammann. Those who followed Ammann became known as Amish. These followers were originally from three main places: the German-speaking parts of Switzerland, Alsace (now part of France), and the Palatinate of Germany. In the early 18th century, many Amish and Mennonites immigrated to Pennsylvania for a variety of reasons. Today, the most traditional descendants of the Amish continue to speak Pennsylvania German, also known as Pennsylvania Dutch. However, a dialect of Swiss German predominates in some Old Order Amish communities, especially in the American state of Indiana. As of 2000, over 165,000 Old Order Amish live in Canada and the United States. A 2008 study suggested their numbers have increased to 227,000, and in 2010 a new study suggested their population had grown by 10% in the past two years to 249,000, with increasing movement to the West.