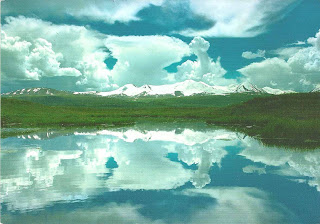 This postcard [amazing aspect of the lake] was sent by Elena from Russia via postcrossing [RU-420053]. It shows Ukok plateau.

Ukok Plateau is a remote and pristine grasslands area located in the heart of southwestern Siberia, the Altai Mountains region of Russia near the borders with China, Kazakhstan and Mongolia. The Pazyryk is the name of an ancient people who lived in the Altai Mountains on this plateau who are associated with some spectacular archeological findings, including mummies found frozen in the permafrost. Many ancient Bronze Age tomb mounds have been found in the area and have been associated with the Pazyryk culture which closely resembled that of the legendary Scythian people to the west. The term kurgan is in general usage to describe such log-barrow burials. Excavations of this site have continued to yield fascinating archaeological findings. One famous finding is known as the Ice Maiden, excavated by Russian archaeologist, Natalia Polosmak. Three tattooed mummies (c. 300 BC) were extracted from the permafrost of the Ukok Plateau in the second half of the 20th century.
It is recognized as part of the UNESCO World Heritage Site entitled Golden Mountains of Altai as an important environmental treasure. It provides a habitat for many of the world's endangered species including one of its least studied predatory animals: the snow leopard. Other endangered species protected there include the Argali mountain sheep, the steppe eagle, and the Black Stork. Currently the Ukok Plateau is being threatened by plans for a gas pipeline between China and Russia. It is also being threatened by a proposal to build a road through it as well as overuse of the steppe by ranchers.
The Ice Maiden and other archaeological finds were located just within a disputed strip of land between Russia and China. The residents of the Altai Republic are demanding the return of the burial artifacts from their current location in Novosibirsk. [wikipedia]