It's been a while since I last wrote here...But now I'm back for good :) 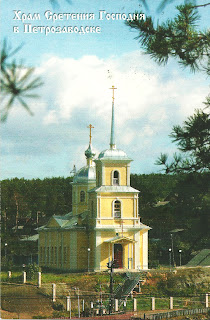 This postacrd arrived today. It was sent by Lesha via postcrossing [RU-764636]. It shows a church in Petrozavodsk, but unfortunately I could not figure out which church it is. If someone knows Russian and can identify it, please let me know!


Petrozavodsk (Russian: Петрозаво́дск; Karelian/Vepsian/Finnish: Petroskoi) is the capital city of the Republic of Karelia, Russia. It stretches along the western shore of the Lake Onega for some 27 kilometers (17 mi). Population: 263,540 (2010 Census preliminary results).
On September 11, 1703, Prince Menshikov founded the settlement of Petrovskaya Sloboda ("Petrine Sloboda"). He did so at the behest of Tsar Peter the Great, who needed a new iron foundry to manufacture cannons and anchors for the Baltic Fleet at the time of the Great Northern War (1700–1721). At first the foundry used the name Shuysky zavod (literally, "factory at the Shuya River"), but a decade later it became Petrovsky zavod ("Petrine factory"), after the name of the reigning monarch. From this form the present name of the city derives.
By 1717, Petrovskaya Sloboda had grown into the largest settlement in Karelia, with about 3,500 inhabitants, a timber fort, a covered market, and miniature palaces of the Tsar and Menshikov. The town's best-known landmark became the wooden church of Saints Peter and Paul, rebuilt in 1772 and renovated in 1789. The church retained its original iconostasis until this relic of Peter's reign was destroyed by fire on October 30, 1924.
After Peter's death, Petrovskaya Sloboda became depopulated and the factory declined. It closed down in 1734, although foreign industrialists maintained copper factories in the vicinity.
The industry revived in 1773 when Catherine the Great established a new iron foundry upstream the Lososinka River. Designed to provide cannons for the ongoing Russo-Turkish Wars, the foundry was named Alexandrovsky, after Alexander Nevsky, who was considered a patron saint of the region. The factory was modernized and expanded under supervision of Charles Gascoigne in 1787–96. Local pundits claim that the first railway in the world (чугунный колесопровод) was inaugurated for industrial uses of the Alexandrovsky foundry in 1788.
During Catherine's municipal reform of 1777, Petrovskaya Sloboda was incorporated as a town, whereupon its name was changed to Petrozavodsk. A new Neoclassical city center was then built, focused on the newly-planned Round Square. In 1784 Petrozavodsk was large enough to supplant Olonets as the administrative center of the region. Although Emperor Paul abolished Olonets Governorate, it was revived as a separate guberniya in 1801, with Petrozavodsk as its administrative center.
During the Finnish occupation of East Karelia in the Continuation War (1941–1944), the occupier chose to style the city Äänislinna (or Ääneslinna), rather than the traditional Petroskoi. The new name was a literal translation of Onegaborg, the name of a settlement marked on a 16th century map by Abraham Ortelius near the present-day city, Ääninen being the Finnish toponym for Lake Onega.
The city was occupied by Finnish troops for nearly three years before it was retaken by Soviet forces on June 28, 1944. The Finns set up concentration camps for the civilians which they operated until the Red Army reoccupied the area. The first camp was located at Petrozavodsk (October 24, 1940). Six such camps were set up in Petrozavodsk, with about 25,000 women, children and old people confined in them. One source estimated 4,000 people perished there, primarily because of malnourishment, most dying during the spring and summer of 1942. [wikipedia]
Posted by ikouneni at 12:08 PM