A very dear couple of friends went to England on a Beatles themed journey. They sent me this postcard, which they got at Cavern Club. 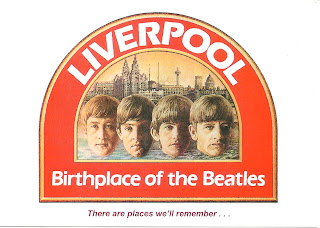 The Cavern Club in Mathew Street, Liverpool was the venue where The Beatles' (formerly known as The Quarrymen) UK popularity started. John Lennon, Paul McCartney, George Harrison and their drummer at the time, Pete Best, were first seen by Brian Epstein at the club. Epstein eventually became their manager, going on to secure them a record contract. Best was replaced by Ringo Starr on 16 August 1962, which upset many Beatles' fans. After taunts of, "Pete forever, Ringo [Starr] never!", one agitated fan headbutted Harrison in the club.
The Cavern Club was the third club managed by Alan Synter, which originally opened as a jazz-only club on 16 January 1957, being styled after the Paris venue, Le Caveau. The Quarrymen made their first appearance at the club on 21 February 1957, but by 9 February 1961, when the group first performed there under their new name of The Beatles, the club was under the ownership of Ray McFall. The Cavern Club's popularity grew, rapidly becoming the most famous club in Britain. According to the club's resident DJ, Bob Wooler, The Beatles made 292 appearances at the club in 1961, 1962 and 1963, culminating in a final appearance there on 3 August 1963—one month after the group recorded "She Loves You", and six months before their first trip to the United States.
The club changed hands several more times before eventually being demolished to allow construction of an underground railway ventilation duct, before being used as a car park. A replica of the club was built on "75 per cent of the original site" in 1984, built with 15,000 bricks retrieved from the original club site. On 16 January 1997, a sculpture of Lennon was unveiled outside The New Cavern Club, and on 14 December 1999, McCartney performed there, playing his last concert of the 20th century and publicising his album, Run Devil Run. [wikipedia]