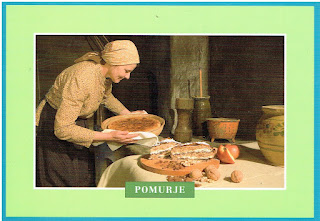 I have to admit I love postcards that picture the local traditions. This is one of them. It was sent by Robert from beautiful SLovenia via Postcrossing [SI-122265]. He writes that the 'card shows a housekeeper in daily traditional costume baking pastries - Prekmurska Gibanica, very tasty pastries.'

Prekmurska gibanica (Prekmurian layer cake) is a type of Slovenian gibanica or layered cake. It contains poppy seeds, walnuts, apples, raisins and ricotta fillings. Although native to Prekmurje, it has achieved the status of a national specialty of Slovenia. The unique sweetmeat shows the variety of agriculture in this region. The name gibanica comes from dialectical expression güba and in this case refers to a fold. For centuries prekmurska gibanica was served as a festive and ritual dish in Prekmurje. The exact origin of the recipe is not clear. Early sources suggest that it evolved over centuries. The oldest extant document (1828) by József Kossics described the wedding (prek: "Gostüvanje) never goes by without gibanica, which is done as follows: "The dough is rolled until thin, sprinkled with grated cabbage, turnips or ricotta. All is covered by second layer of dough. It is sprinkled as previously. 10 or 11 such layers are thus composed and form a conspicuous cake."

The prekmurska gibanica was chosen to represent Slovenia in the Café Europe initiative of the Austrian presidency of the European Union, on Europe Day 2006. In March 2010, the EU gave Prekmurska gibanica Protected Geographical Status within Europe. [wikipedia]

If anyone has an authentic Prekmurska gibanica recipe, do write it in the comments. I would love to make a traditional one [I am sure I can find loads online, but I would prefer an old family recipe - is it too much to ask?] 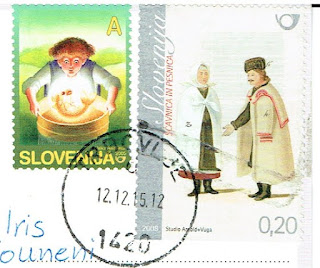 The postcard was postmarked on 12 December 2015 in Trbovlje, Slovenia.
Posted by ikouneni at 2:33 AM