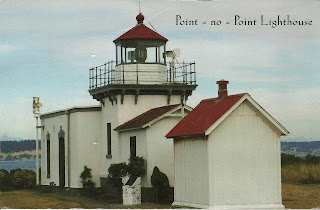 This beautiful postcard was sent by Paula from Washington via postcrossing [US-1273841]. The image on the card is actually one of her photographs!!She turns some of her photos into postcards and sells them to the local gift shop! What a great idea :)

This Lighthouse is situated at Hansville at a place called Point No Point - pretty weird name, huh?

Point No Point is an outcropping of land on the northeast point of the Kitsap Peninsula in Washington, the United States. It was the location of the signing of the Point No Point Treaty. It was named by Charles Wilkes during the United States Exploring Expedition of Puget Sound in 1841. Named after Point No Point on the Hudson River (which is also called Dietrick's Hook), the point is home to the Point No Point Light. Wilkes gave the point its name because it appears much less of a promontory at close range than it does from a distance.
Local residents wanted the lighthouse located further north on Foulweather Bluff. When the Point No Point location was agreed upon, the owners of the land were reluctant to sell. Finally, the owners agreed to sell 40 acres for $1000. Construction of the lighthouse began in April 1879. The first light used was a kerosene lamp. As 1879 drew to a close, the lens and a glass for the lantern had not arrived, so the first lighthouse keeper, J.S. Maggs, a Seattle dentist, hung a canvas over the south window openings to break the wind and keep the kerosene lamp from blowing out.
Upon completion of the light station in February 1880, the lantern room held a fifth-order Fresnel lens. The original masonry structure was 27 feet (8.2 m) high. The present 30-foot (9.1 m) brick and stucco tower is square and situated between the office and fog signal building. A fog signal, formerly used at New Dungeness Lighthouse, was installed in April 1880. There were no roads to the Point No Point Lighthouse for the first 40 years, so supplies had to be brought in by boat.
Lightning struck the lens in 1931, cracking a prism. The tower was also damaged which required patching and replacing the copper tubing. In 1975, a 90-foot (27 m) radar tower was built on the west side of the lighthouse. The tower is used for the Vessel Traffic Service (VTS). In 1977, the Point No Point Lighthouse became fully automated, and only required one man to be assigned to the station. In 1990, the fog bell was replaced by a Daboll trumpet. The lens in the tower was changed to a fourth-order Fresnel lens, which is still in place today.
In 1997, the last U.S. Coast Guard personnel left Point No Point and it stood empty until the Coast Guard leased the property for Kitsap County Parks and Recreation. [wikipedia]