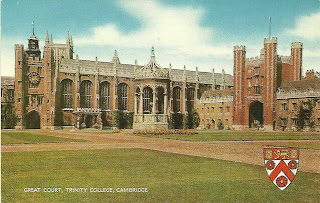 This is another postcard found in a house that was going to be demolished. It shows the great court of Trinity College at Cambridge.

The history of Trinity goes back to the reign of Henry VIII and most of its major buildings date from the 16th and 17th centuries. The beauty and size of Trinity's courts attract visitors from all over the world, but the College is also a thriving, modern community.

The oldest parts of the College date from the time of King's Hall, including the range behind the Clock Tower, which are medieval, and the Great Gate, which was built at the beginning of the 16th century. The clock strikes the hour twice, first on a low note and then on a much higher one. The tower once stood about 20 yards from where it is now and was moved to its present site when Great Court (shown in postcard) was laid out.
Many of the buildings that we see today were built through the efforts of Thomas Nevile, who became Master of Trinity in 1593, including the main features of Great Court and a large part of the beautiful, cloistered court on the side of the Hall that faces the river. Nevile's Court was completed in the late 17th century when the library designed by Sir Christopher Wren was built. The Wren Library contains many treasures, the oldest of which is an 8th century copy of the Epistles of St Paul. New Court and courts on the other side of Trinity Street opposite the Great Gate were erected in the 19th century. In more recent times, much new building has been completed, including Blue Boar Court and Burrell's Field.

The College grew rapidly in importance during the century after its foundation and by 1564 it accounted for about a quarter of the total number of resident members of the University.

Undergraduates of the 16th century included Francis Bacon, philosopher and statesman, and the Earl of Essex, a favourite of Elizabeth I. The poets George Herbert, Andrew Marvell and John Dryden were at Trinity in the first half of the 17th century. Isaac Newton, one of the greatest of all physical scientists, entered the College as an undergraduate in 1661 and remained at Trinity until 1696, by which time his most important mathematical and scientific work had been completed.

Byron, Thackeray, and Tennyson were Trinity undergraduates in the early part of the 19th century. The statue of Byron now in the Wren Library was intended for Westminster Abbey, but the poet's notoriety was such that the offer was refused. Earl Grey, whose government introduced the great Reform Bill of 1832, is one of Trinity's six Prime Ministers.

Famous figures associated with Trinity in the late 19th and early 20th centuries include James Clerk Maxwell, author of the theory of electromagnetism; J.J. Thomson and Ernest Rutherford, two of the pioneers of atomic physics; the historian G.M. Trevelyan; philosophers Bertrand Russell and Ludwig Wittgenstein; Jawaharlal Nehru, the first Prime Minister of India; and the novelist Vladimir Nabokov.

Life at Trinity has changed greatly over the centuries but the strong academic tradition has been maintained. In science and economics, for example, Trinity has provided 32 Nobel Prizewinners since they were first awarded in 1901. Today the College is part of a forward-looking University renowned for the excellence of its teaching and research.  [Trinity College]
Posted by ikouneni at 2:25 AM