A roadtrip 52 years ago | Norway 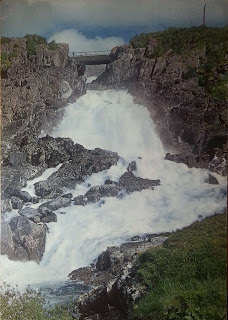 This postcard was sent by the same person as the next one, while on her road trip to Scandinavia. It shows the Adamsfoss waterfalls in Finnmark, Finland. 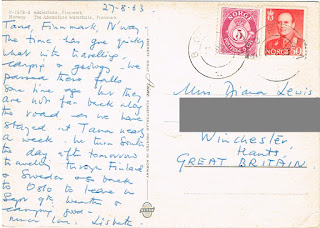 It reads: "27 - 8 - 63 Tana, Finnmark, N'way
The time has gone quickly when with travelling, camping and .... . We passed these falls some time ago but they are not far back along the road as we have stayed in Tana near a week. Weturn South the day after tomorrow travelling through Finland and Sweden and go back to Oslo to leave in Sept 9th [...] Much love, Lisbeth" This lovely postcard was sent a few days later. It is one of the postcards I am not sure how to archive, since it shows a Norwegian landscape, but has a Swedish stamp. It shows the view towards the North Cape plateau in Norway. 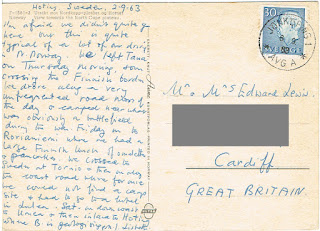 In the back it reads: "Hoting, Sweden, 2 - 9- 63
I'm afraid we didn't quite go here but this is quite typical of a lot of our driving in N. Norway. We left Tana on Thursday morning, from crossing the Finnish border I've drove along a very unfrequented road most of the day and camped near what was obviously a battlefield during the war. Friday in to Rovianemi where we had a large Finnish lunch and omelette and panacotta. We crossed to Sweden at Tornio and then all along the coast road where for miles we could not find a camp site and had to go to a hotel in Lulea. Sat[urday] in down coast to Umea and then inland to Hoting where B. is ....[?] Lisbeth"

It must have been an amazing road trip. I wonder where they went next... Did they make it to Oslo?
Posted by ikouneni at 2:52 PM