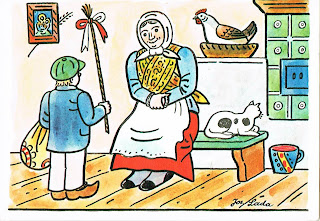 Another postcard with illustration from Josef Lada. I like the simplistic design and basic colours. Born in the small village of Hrusice in a cobbler's family, he went to Prague at the age of 14 to become an apprentice binder. Entirely self-taught, he created his own style as a caricaturist for newspapers, and later as an illustrator. He produced landscapes, created frescoes and designed costumes for plays and films. Over the years he created a series of paintings and drawings depicting traditional Czech occupations, and wrote and illustrated the adventures of Mikeš, a little black cat who could talk. 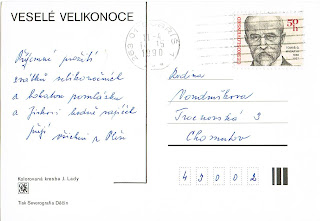 As said before, unfortunately I do not recognise the language [if anyone can translate, it would be much appreciated]. The stamp shows Tomas Masaryk. The card was posted on 15th December 1990.

After trying to reform the Austro-Hungarian monarchy into a federal state, with the help of the Allied Powers, he eventually succeeded in gaining Czechoslovak independence as a republic after World War I. He both founded and was the first President of Czechoslovakia and so is called the "President Liberator".