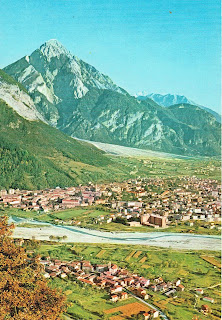 This picturesque postcard shows Tolmezzo (Friulian: Tumieç, Slovene: Tolmeč, archaic German: Tolmein or Schönfeld; Timau Cimbrian: Schunvelt) is a town and comune in the province of Udine, part of the Friuli-Venezia Giulia region of north-eastern Italy. Tolmezzo is located at the foot of the Strabut Mountain, between the Tagliamento River and the Bût stream. Nearby is the Mount Amariana, elevation 1,906 metres (6,253 ft). The commune also includes the five frazioni of Cadunea (Friulian: Cjadugnee), Caneva (Cjanive), Casanova (Cjasegnove), Fusea (Fusee), Illegio (Dieç), Imponzo (Dimponç).

The existence of Tolmezzo (called Tolmetium) is first documented in the late 10th century, when it was part of the Patriarchate of Aquileia, but it has been suggested that the town stemmed from a very ancient pre-Roman settlement. In Roman times, the area was crossed by one of the main Roman roads that connected Italy to what is now Austria.

The city had a flourishing market, and was defended by a line of walls with 18 towers and by the castle of the Patriarchs. In 1420, it was annexed to the Republic of Venice, but its trades and industries did not suffer from the change, and the city maintained its privileges. In 1797, with the Treaty of Campo Formio, it was handed over to the Austrian Empire, and, after a short Napoleonic rule, it was included in the client Kingdom of Lombardy-Venetia.

Tolmezzo became part of the new unified Kingdom of Italy in 1866. 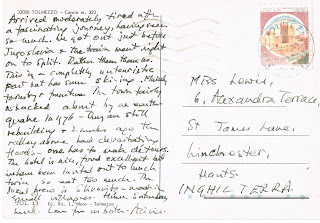 The card was posted on 30th September 1983 to Mrs Lewis in England. It reads: 'Arrived moderately tiredafter a fascinating journey, having seen so much. We got om & just before Yugoslavia & the train went right on to Split. Rather [...]. This is a completely untouristic part but has some skiing. Mainly forestry [...]. The town fairly astacked about by an earthquake in 1976. They are still rebuilding & 2 weeks agothe valley above had devastating roads - one has to take detours. The hotel is nice, food excellent but we have been invited out to lunch twice so eat too much. The local brew in Slivovitz - wooden small [...] Saturday back. Love from us both - Arivia'

The 1976 Friuli earthquake, also known in Italy as Terremoto del Friuli (Friulian earthquake), took place on May 6 with a moment magnitude of 6.5 and a maximum Mercalli intensity of X (Extreme). The shock occurred in the Friuli region in northeast Italy near the town of Gemona del Friuli. Up to 978 people were killed, 2,400 were injured, and 157,000 were left homeless.
Posted by ikouneni at 7:09 AM