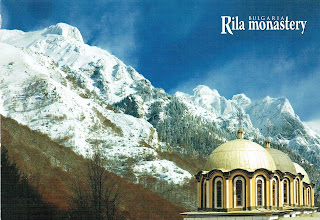 A good friend sent me this postcard from Bulgaria on 1st November 2016. It shows Rila Monastery. I have not been in Bulgaria yet, but she tells me that I 'should really visit this place in autumn'. I will try dear V.

The Monastery of Saint Ivan of Rila, better known as the Rila Monastery (Bulgarian: Рилски манастир, Rilski manastir) is the largest and most famous Eastern Orthodox monastery in Bulgaria. It is situated in the southwestern Rila Mountains, 117 km (73 mi) south of the capital Sofia in the deep valley of the Rilska River at an elevation of 1,147 m (3,763 ft) above sea level, inside of Rila Monastery Nature Park. The monastery is named after its founder, the hermit Ivan of Rila (876 - 946 AD), and houses around 60 monks.

Founded in the 10th century, the Rila Monastery is regarded as one of Bulgaria's most important cultural, historical and architectural monuments and is a key tourist attraction for both Bulgaria and Southern Europe. In 2008 alone, it attracted 900,000 visitors. The monastery is depicted on the reverse of the 1 lev banknote, issued in 1999. 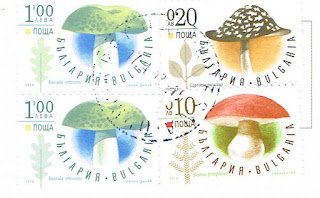