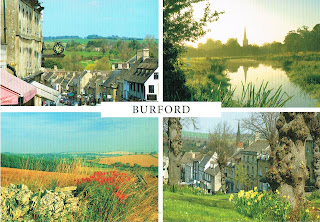 One of my favorite destinations in the UK is the Cotswolds. A few months ago I spent the weekend in Burford, one of the most picturesque English towns I have even visited.


Burford is a medieval town on the River Windrush in the Cotswold hills in West Oxfordshire, England. It is often referred to as the 'gateway' to the Cotswolds. The toponym derives from the Old English words burh meaning fortified town or hilltown and ford, the crossing of a river. The 2011 Census recorded the population of Burford parish as 1,410 and Burford Ward as 1,847.

Burford has twice had a bell-foundry: one run by the Neale family in the 17th century and the other run by the Bond family in the 19th and 20th centuries. Henry Neale was a bell-founder between 1627 and 1641 and also had a foundry at Somerford Keynes in Gloucestershire. Edward Neale had joined him as a bell-founder at Burford by 1635 and continued the business until 1685. Numerous Neale bells remain in use, including at St Britius, Brize Norton, St Mary's, Buscot, St James the Great, Fulbrook and SS Peter and Paul, Steeple Aston. A few Neale bells that are no longer rung are displayed in Burford parish church.


Henry Bond had a bell-foundry at Westcot from 1851 to 1861. He then moved it to Burford where he continued until 1905. He was then succeeded by Thomas Bond, who continued bell-founding at Burford until 1947. Bond bells still in use include four of the ring of six at St John the Evangelist, Taynton, one and a Sanctus bell at St Nicholas, Chadlington and one each at St Mary the Virgin, Chalgrove and St Peter's, Whatcote in Warwickshire.

Local legend tells of a fiery coach containing Sir Lawrence Tanfield of Burford Priory and/or his wife flying around the town that brings a curse upon all who see it. Andrews speculates that the apparition may have been caused by a local tradition of burning effigies of the unpopular couple that began after their deaths. The visitations were reportedly ended when local clergymen trapped Lady Tanfield's ghost in a corked glass bottle during an exorcism and cast it into the River Windrush. During droughts locals would fill the river from buckets to ensure that the bottle did not rise above the surface and free the spirit. [wikipedia]