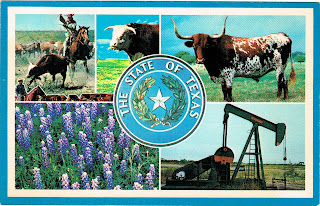 This postcard is again from my collection. It is a multi-view of Texas, USA. Texas (Spanish: Texas or Tejas) is the second largest state in the United States of America by both area and population. Geographically located in the South Central region of the country, Texas shares borders with the U.S. states of Louisiana to the east, Arkansas to the northeast, Oklahoma to the north, New Mexico to the west, and the Mexican states of Chihuahua, Coahuila, Nuevo León, and Tamaulipas to the southwest, while the Gulf of Mexico is to the southeast.

Houston is the most populous city in Texas and the fourth largest in the U.S.A.. Texas is nicknamed "The Lone Star State" to signify its former status as an independent republic, and as a reminder of the state's struggle for independence from Mexico. The origin of Texas's name is from the word "Tejas," which means "friends" in the Caddo language.

Due to its size and geologic features such as the Balcones Fault, Texas contains diverse landscapes that resemble both the U.S. Southern and Southwestern regions. Although Texas is popularly associated with the U.S. southwestern deserts, less than 10% of Texas' land area is desert. Most of the population centers are located in areas of former prairies, grasslands, forests, and the coastline. Traveling from east to west, one can observe terrain that ranges from coastal swamps and piney woods, to rolling plains and rugged hills, and finally the desert and mountains of the Big Bend.

The term "six flags over Texas" refers to several nations that have ruled over the territory. Spain was the first European country to claim the area of Texas. France held a short-lived colony. Mexico controlled the territory until 1836 when Texas won its independence, becoming an independent Republic. In 1845, Texas joined the union as the 28th state. The state's annexation set off a chain of events that led to the Mexican–American War in 1846. A slave state before the American Civil War, Texas declared its secession from the U.S. in early-1861, and officially joined the Confederate States of America on March 2 of the same year. After the Civil War and the restoration of its representation in the federal government, Texas entered a long period of economic stagnation. [wikipedia]
Posted by ikouneni at 5:20 AM