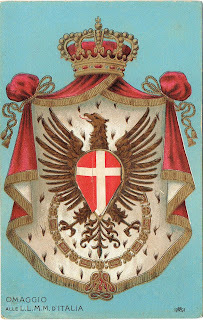 This is one of the most interesting postcards I own. It depicts the Savoy Coat of Arms. The House of Savoy (Italian: Casa Savoia) is one of the oldest royal families in the world, being founded in 1003 in the historical Savoy region. Through gradual expansion, it grew from ruling a small county in that region to the attainment of the rank of king (of Sicily) in 1713. Through its junior branch, the House of Savoy-Carignano, it led the unification of Italy in 1861 and ruled the Kingdom of Italy from 1861 until 1946 and, briefly, the Kingdom of Spain in the 19th century. The Savoyard kings of Italy were Victor Emmanuel II, Umberto I, Victor Emmanuel III, and Umberto II. The last monarch ruled for a few weeks before being deposed following the Constitutional Referendum of 1946, after which the Italian Republic was proclaimed. 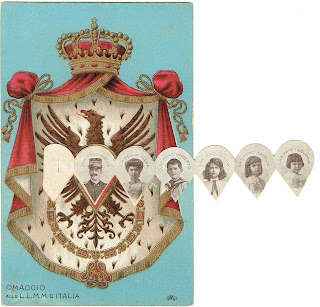 The interesting thing with this postcard is that the centre is a small 'envelope' in which -when opened- one can find the portraits of the family of King Victor Emmanuel III [1st picture]. In 1896 he married princess Elena of Montenegro (1873–1952) [2nd picture], daughter of Nicholas I, King of Montenegro. Their issue included: 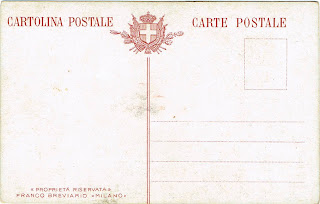 The postcard is not used, but from a little research I did it is possibly dated in 1915.