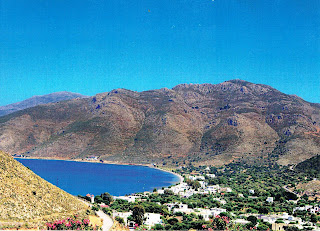 A couple of months ago, when I came home from work I had a pleasant surprise! A beloved friend has moved to Tilos island and sent me this beautiful postcard! She wrote that this is the view she has on her way to work (she teaches Greek to refugee children).

Tílos (Greek: Τήλος; ancient form: Telos) is a small Greek island and municipality located in the Aegean Sea. It is part of the Dodecanese group of islands, and lies midway between Kos and Rhodes. It has a population of 780 inhabitants (2011 census). Along with the uninhabited offshore islets of Antitilos and Gaidaros, it forms the Municipality of Tilos, which has a total land area of 64.525 square kilometres (24.913 sq mi). Tilos is part of the Rhodes regional unit.

Popularly, Telos was the son of Helios and Halia, the sister of the Telchines. He came to the island in search of herbs to heal his ill mother, and later returned to found a temple to Apollo and Neptune. However, Telos (Telo or Tilo) does not appear in Greek mythology and the name probably has an unknown pre-Hellenic origin. Pliny the Elder notes that in antiquity Telos was known as Agathussa (Αγαθούσσα) (also Agathusa and Agathousa). In the Middle Ages, it was known by the Italian as Episcopio, either because it was a Bishop Seat or because its position as Vantage Point. The island has also been called in Turkish İlyaki and in modern Italian Piscopi. 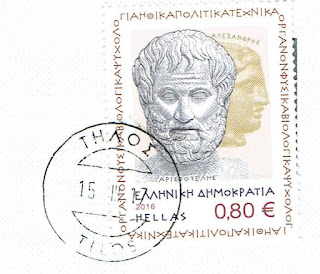 It was posted on 15 March 2017 and the stamp used pictures Aristotle. To mark the 2400th anniversary of the birth Aristotle, who was born in 384 BCE, Hellenic Post issued a commemorative set of stamps to honour his invaluable contribution to humanity. The works of the great Macedonian philosopher of antiquity, the student of Plato and the tutor of Alexander the Great, unique in range and influence in the history of human thought, are an integral and essential part of world cultural heritage.

This is the thinking behind UNESCO proclaiming 2016 “Aristotle Anniversary Year”, an initiative of the Interdisciplinary Centre for Aristotle Studies at the University of Thessaloniki, implemented by the Greek National Commission for UNESCO.
Posted by ikouneni at 5:29 AM