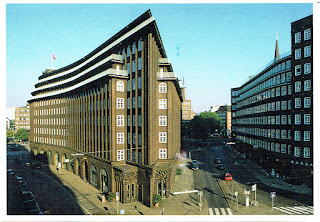 This beautiful postcard of Das Chilehaus was sent by Claus via postcrossing [DE-4484848]. He wrote: "The Chilehaus has been named a UNESCO World Heritage Site together with the Warehouse district in July. It was built between 1922 and 1924 as an office building and it's shaped like a ship. The red bricks are very typical for Hamburg, many buildings were built with that material." I love it when fellow postcrossers actually read your profile and send you cards that you will probably like. I think Claus has nailed it!

A bit more trivia about the building: The Chilehaus (Chile House) is a ten-story office building in Hamburg, Germany. It is located in the Kontorhausviertel. It is an exceptional example of the 1920s Brick Expressionism style of architecture. This large angular building is located on a site of approximately 6,000m², spanning the Fischertwiete Street in Hamburg. It was designed by the German architect Fritz Höger and finished in 1924. [wikipedia]