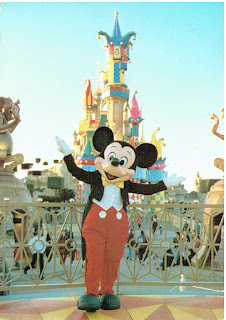 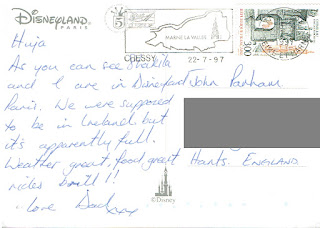 Disneyland is the most magical place in the world! This postcard was sent in 22 July 1997 from Disneyland, Paris to Fareham, England. It reads: " Hiya, as you can see Shakita and I are in Disneyland Paris. We were supposed to be in Ireland [?] but it's apparently full. Weather great, food great, rides ....[??] Love Dad" 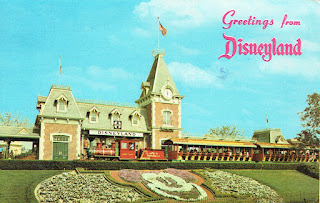 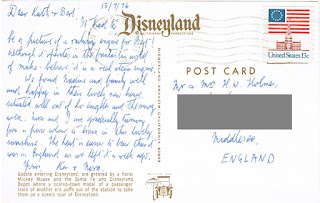 This one is a bit older. It was sent on 13 July 1976 from Disneyland California to Middlesex England. The handwriting is a bit difficult to read. It reads: " Dear Kath and Bert, [?] a picture of a railway engine for Bert! Although it operates in the futuristic world of make-believe, it is a real steam engine. We found Nadine [?] and family well and happy in their lively new home. [...] well out of Los Angeles and the [...]. Norm and I are gradually turning from a pure white to brown in this lovely sunshine. The heat is easier to bear than it was in England as we left it a week ago. Yours, K and Norm" 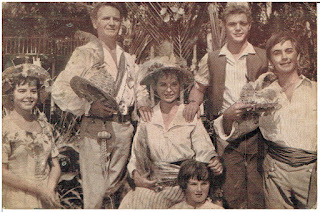 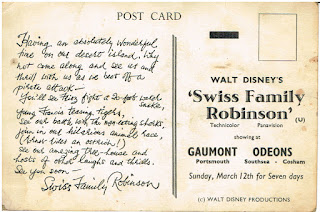 Finally, this card was a promotional postcard of the Walt Disney's 'Swiss Family Robinson' movie. It is a 1960 American family film starring John Mills, Dorothy McGuire, James MacArthur, Janet Munro and Tommy Kirk in a tale of a shipwrecked family building an island home, loosely based on the 1812 novel Der Schweizerische Robinson (literally, The Swiss Robinson) by Johann David Wyss. The film was directed by Ken Annakin and shot in Tobago and Pinewood Studios outside London. It was the second feature film version of the story (the first film version was released by RKO in 1940) and was a commercial success.

Swiss Family Robinson was the first widescreen Disney film shot with Panavision lenses. When shooting in widescreen, Disney had nearly always used a matted wide screen or filmed the movie in CinemaScope. [wikipedia]
Posted by ikouneni at 1:31 AM