The Rock of Gibraltar | Gibraltar 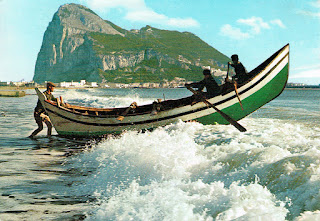 This postcard shows the Gibraltar Rock. The Rock of Gibraltar (Spanish and Llanito: Peñón de Gibraltar, sometimes called by its original Latin name, Calpe) is a monolithic limestone promontory located in the British overseas territory of Gibraltar, off the southwestern tip of Europe on the Iberian Peninsula. It is 426 m (1,398 ft) high. The Rock is Crown property of the United Kingdom, and borders Spain. Most of the Rock's upper area is covered by a nature reserve, which is home to around 300 Barbary macaques. These macaques, as well as a labyrinthine network of tunnels, attract a large number of tourists each year.

The Rock of Gibraltar was one of the Pillars of Hercules and was known to the Romans as Mons Calpe, the other pillar being Mons Abyla or Jebel Musa on the African side of the Strait. In ancient times the two points marked the limit to the known world, a myth originally fostered by the Greeks and the Phoenicians.

Gibraltar is not the southernmost point of Europe, which is the Punta de Tarifa, at 25 kilometres Southwest of Gibraltar, as the crow flies. Gibraltar is surrounded by the Mediterranean Sea and has no contact with the Atlantic Ocean. [wikipedia]
Posted by ikouneni at 10:19 AM